Rohum Pourtahmasbi‘s long term video project ‘Rolling: Without Footage it’s Fiction’ will be premiering at House of Vans London on July 14th at 8pm. The film focuses on skateboarding’s videographers and sees a wide array of well known heads swapping sides of the lens, making this of definite interest to anyone wanting an understanding of the finer points of skate video creation.

Check out the most recent trailer, then get down to House of Vans on the 14th! 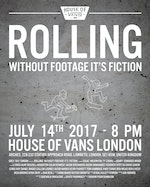 House of Vans London will be hosting the Zoo York 'Unbreakable' launch this Friday night, with a showing of the classic video 'Mixtape' and a...

Henry Edwards-Wood sits down in conversation with Rohum Pourtahmasbi to talk skate video vibes, putting together a dictionary of skateboarding terminology with relation to maths...

Anti Hero and Six Stair's newest full length 'The Body Corporate' will be premiering at House of Vans London this Saturday night at 6:30pm, followed...

'Rolling: Without Footage It's Fiction', how Instagram has changed consumption of skateboard media and the upcoming Death video amongst other things, amongst the piss-reek of...

The House of Vans July skate dates to pencil in take place this week, with a Girls Skate Night tonight and a Skate Fry-Day tomorrow...