For those of you with long memories and a particular dedication to the video output of Sidewalk, you may remember our coverage of the Dean Lane Hardcore Funday last summer which was soundtracked by two particularly abrasive slices of hardcore punk, one of which pertained to Ernest Borgnine’s onanistic habits. These tracks were by Falmouth punks Rash Decision and were taken from the first Dean Lane Hardcore split EP, where they were joined by currently on hiatus Bristol thrashers The Broken Bones Gentlemen’s Club and skate rock legends JFA – all three of whom had found themselves playing to a crowd of rowdy, half cut skateboarders the summer previous in the dingy confines of the Stag and Hounds pub.

Fast forward to this spring and one of my occasional forays into Sidewalk’s Facebook messages threw up a message from one of Rash Decision’s members offering up a link to the MP3s of their upcoming album Karoshi asking if we’d like to review it on the site. I’m never one to turn down the chance to punish my ear drums still further in the continued vendetta I’ve been conducting against them since the age of 14, so I immediately pressed the download button and got stuck in… 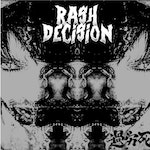 Album opener ‘900 minutes’ sets the blueprint for things to come, clocking in at very much less than 900 minutes in a blast of gravel soaked vocals on top of a pummeling wall of sound. Rash Decision are one of those bands who tread the  line between hardcore punk and thrash metal, but not so much in a crossover sense as in a ‘making the fastest, most pissed off sounds they can’ kind of sense. Comparisons are regularly made to said crossover originators a la Cro-Mags or DRI, or probably more accurately to modern thrash-punk torch carriers Municipal Waste, but the immediate connection for me upon first listening was to the mid 90s sounds of the likes of Redemption 87 and Battery. And those bands didn’t grow up being shit on by seagulls in deepest, darkest Cornwall, making such comparisons moot anyway. Tracks like ‘The Martockian’ and ‘The Seagull Has Landed’ belie an ear for a well crafted melody which does nothing to soften the anger in the music but rather amplifies it. Musically their closest UK contemporaries are probably Manchester speed punk lunatics Revenge of the Psychotronic Man, so the TNS Records logo on the back cover is no surprise – and ‘Fuck The Tide’ in that respect is a solid follow up to that bands ‘Fuck The Sea’, albeit with much darker, less comedic lyrical content.

That’s not to say the band don’t have a sense of humour – taking yourself too seriously has never been a major factor in the UK punk scene and, as previously mentioned, this is the band who released ‘XErnestXBorgnine’. To these ends, we’re putting money on Rash Decision being the first band in hardcore punk to close a track with a rousing rendition of Enya’s ‘Sail Away’. This is just as good as the dancehall cover by Buccaneer, and rest assured I don’t say that lightly.

Squeezing 14 tracks into under 20 minutes, this pushes all the right buttons when it comes to making music that is fast, angry and to the point. If that’s your cup of tea you’ll enjoy it, if you like Coldplay you’ll probably run screaming from the room, but it’s definitely heartwarming to know that this lot are keeping the riotous West Country punk legacy of Chaos UK and their ilk alive and well. Get hold of it on vinyl while you can! Summer 2016 nostalgia for the flyer art nerds out there;