The RaD Kickstarter has 22 days left to hit its target, with the end goal of getting ‘The Book of the Magazine’ published with a shitload of UK (and beyond) skate nostalgia contained within its pages. This would be an incredible project to see realised, so click on the image below to donate if you can! In the meantime, scroll down for a selection of the photos which will be making their way back into print if this happens…

“It is impossible to overlook, or underestimate, the influence and importance of RaD magazine… an important social document of a period, that extends much further than simply the world of skateboarding.”

The Read and Destroy Archive is currently running a Kickstarter fundraiser to enable publication of a two-volume book that revisits the seminal independent skate magazine RaD (Read and Destroy), first published over 30 years ago – and still with a global following today. It is an inside view on skateboarding and youth culture from the 1970s, 80s and 90s, told primarily through the archives of 6 British skate photographers at the core of the magazine’s original editorial team.

RaD documented a unique time, place and attitude within youth culture – significantly capturing skateboarding’s death, re-birth and progression. For a generation of 1980s youth; pre X Games and the internet, the magazine was a vital connection to their subculture; featuring all the best US professional skaters and showcasing skateboarding talent, both amateur and professional from across the UK and Europe. Under the editorship of Tim Leighton-Boyce an experimental, seemingly irreverent approach quickly established itself – the end result, closer to a fanzine than a traditional glossy news-stand publication. Read and Destroy (your preconceptions).

Skateboarding had a vibrant, messy energy as it emerged from the underground and the RaD photographers caught it. These two volumes reunite Vernon ‘Jay Podesta’ Adams, Tony ‘Dobie’ Campbell, ‘Mad’ Mike John, Tim Leighton-Boyce, Paul Sunman and Wig Worland. In addition to these key ‘staff’ photographers, the book will feature highlights from original contributors including Skin Phillips, Andy Horsley, Thomas Campbell, James Hudson, Percy Dean, Leo Sharp, J. Grant Brittain, Spike Jonze and Chris Ortiz amongst others. The main feature of this publication will be the skateboarding that featured in RaD – you’ll hear more from us later as we re-focus on the BMX content that was featured in the mags earlier incarnation BMX Action Bike. 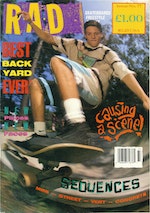 A new generation of skateboarders, designers and academics are responding with enthusiasm to the original magazines, their energetic content and powerful photography. Today’s audience increasingly view the publication as a valued piece of social history – and for those who lived through it all, it is already a treasured part of their youth (you know who you are).

The narrative of the two volumes follows a timeline, divided into 4 sections:

Pt 1: The Roots to RaD 1978–1986. A chronological overview of the years following the proclaimed ‘death’ of skateboarding, before a viable skate media was established. Featuring many previously unpublished images of UK skateboarding’s early pioneers and telling the back-story of how dedicated die-hards became the RaD editorial team. Pt 2: In Full Colour 1987–1993. The years following the paradigm shift as a much-loved BMX magazine evolved into a skateboarding magazine and spoke loudly and in full colour to its new converts.

Pt 2 continued: In Full Colour 1987–1993. The story continues with the boom years of 1988 to 1990 through to the early 1990s. This section covers the accelerated growth of the magazine as it reported on the fast-moving evolution of skateboarding from backyard vert to stadium contests; then on to mini ramps and the eventual dominance of street skating and its new heroes. Pt 3: New Blood 1993–1995. In ’93 founding editor TLB and the original team left the magazine. Keeping the mag alive and steering it through another downturn in skateboarding’s popularity, a new generation of committed photographers and writers took over the much-loved title before eventually leaving to establish Sidewalk magazine; documenting the scene for the next phase in UK skateboarding. Pt 4: Further Information. Timeline overview, covers archive, production history and credits.

The two volumes will feature the best photography, writing and design from the original magazine and tell its story through the voices of those involved – new photographer and contributor interviews giving context to the imagery and times. Classic shots of the era appear alongside previously unseen images including personal snaps, unpublished photographs and contact sheets. As the story of the magazine progresses, we reveal original artwork used in the magazine’s design – previously unseen paste-up layouts, visual experiments, proofs and litho films illustrating lost methods of print production and the transition into early DTP. 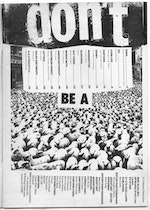 There is a great deal of work ahead. It’s taken over three years to retrieve and organise the photographers’ archives. Once we raise the funds through Kickstarter the enormous and expensive job of scanning, re-touching and proofing the images ready for printing can begin. The book is scheduled to drop approximately seven – eight months from the end of this campaign. Early 2019.

Who is producing this?

For the last 3 years Dan Adams with Andy Holmes have been sorting, archiving and researching the content for the Read and Destroy book, archive and future exhibition. Dan Adams, skateboarder and ramp builder, was one of the original designers at RaD and has been working as a graphic designer for over 25 years. Holmes has edited and produced a number of books including Dysfunctional (with Aaron Rose & Ben Weaver), Futura (with Futura2000 and Ben Drury) and Urban Archeology: MoWax (with James Lavelle and Ben Drury). Both live and work in London, England.

New Balance have generously funded the development work on this publication – without their support we simply wouldn’t be talking to you. We’d like to thank Sebastian Palmer and all at NB for their unswerving belief in this project. New Balance have also committed funding for an exhibition in London to coincide with the books release (date TBC). 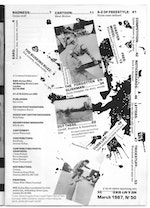 Why are we launching this campaign?

We want to share the gold we have discovered but we need to raise the capital to do it. Once funded we will be able to complete the project and deliver to the standard that the material deserves. The Kickstarter will help us to commit to paper, for future generations, this important chapter of skateboarding history.

In the spirit of the original magazine, we are self-publishing this project because it will allow us to release the book at a lower price and higher quality than we could achieve working with an established publisher. The funds raised will cover the immense cost of scanning and turning 30-year-old analogue transparencies and negatives into a digital format, suitable for high-quality modern lithographic printing. The fantastic content warrants a high standard of production – we want to achieve the best possible quality for the best possible price.