I remember seeing Josh about skating from a real young age, as we’re both part of the same generation of skaters from in and around Bristol. Dark Mark and myself always referred to him as ‘Squinters’ at first because he had super squinty eyes although I don’t think he knows that. He grew up skating in Keynsham, which, no offence, is a shitty little town next to Bath, but luckily it had a skate park! Due to this, ever since I can remember, he’s always been annoyingly good at skateboarding and an all-terrain beast!

The first time we ever filmed shit together was in BCN when I crashed at his place whilst he was living out there. I was out there filming a part with Danny Wainwright for his ‘Three Days In Barcelona’ CLAN 010 edit. Danny showed a crew of us round the city and whilst everyone else would just sit down and watch Big Poppa do his thing; Arnott skated with Danny at pretty much every spot. Since then we have filmed more and more and eventually Peace and I ended up putting him on Skate Cafe. We’re both stoked to have him on board and can’t wait to put out his full-length part in the upcoming Cafe vid! Big ups you giant breadstick!

So you grew up skating in Keynsham as a park rat – tell us about your ratting days…
– Growing up skating in Keynsham was okay, well, apart from localising the shittest park known to man. I’m talking ankle-high rails, wiggly rails with right angles and a mini ramp that was built with the flat bottom on one wall, which basically made it a full pipe, (laughing), so I didn’t really have much to do heelflip indys or Beni’s on man – I still can’t do any grabs to this day. I was partial to a Casper flip though – fakie ones, big spin ones…
I learned them from Bigspin George so I have him to blame for my park-rat shame, (laughing).

How early on in your skating life did you venture into the big city of Bristol and what are your earliest memories of skating there?
– I first ventured in to Bristol with a few Keynsham heads when I was about 14 I reckon. My earliest memories are probably of going to Lloyds because that was the only place we knew about. We didn’t even skate the first few times either, just sat and watched people like Stalker, Will Ainley and Flynn tear the place apart.

So what does your life consist on at the moment?
– My life at the moment is just working for Route One unpacking all the skateboard deliveries. It’s alright – pays the bills and it could be much worse, I could be in Tesco’s or some shit like that. When I’m not working I’m generally just chilling with my girlfriend Kayleigh. I’ve just started making little edits on my computer too, nothing exciting yet though and I’ve not long got a kitten from one of Korahn’s cats – he’s called ‘Ladd’ so I hang out with him, he’s rad. ‘Ladd’ actually means ‘cocaine’ in Swedish as well, which we didn’t know before we named him, (laughing)…

You’ve lived in Barcelona before – how long were you there for and how did you survive without falling into the wasteman trap?
– Living in Barca was rad, a good crew and good times. I stayed out there for about 8 months altogether and I didn’t work a day either, which was rad. As for not falling into the wasteman trap – it is kind of easy to go down that route there just because you have everything on your doorstep so it makes you lazy. You just have to realise that there’s a whole world out there to find stuff to skate – you don’t have to be at Macba or in Spain. Also Barca is a rad city but there are a whole host of other cities that are just as good if not better – people tend to forget that sometimes.

Where else have you been and which destinations would you recommend to anyone with itchy feet?
– Travelling wise, I’ve been to Barcelona, Bordeaux and Copenhagen. I’m going back to Copenhagen again actually, it’s so good there. They just do everything right in that city. Copenhagen is the one place I’d recommend that everyone goes to for sure: amazing spots that are all bust-free, women are like supermodels, everyone rides a bike, the police are proper chilled out about stuff and the city is so flat so skating around is rad. Go to Copenhagen!

You ride for rising Bristol-based Skateboard Café skateboards – how did that happen?
– I’m hyped on it! I was just filming with Rich Smith a lot around the time of the Cafe ‘12 promo with everybody else and ended up having a chunk of footage in that. We went on a Bordeaux trip, filmed a bunch more shit and it just happened after that trip that Rich and Peace asked me to ride for them. They’re my mates and I skate with those guys all the time so it kinda just happened naturally I guess.

How deeply are you trapped in the Internet matrix? Where do you waste your life online and what has lurking there taught you about humanity?
– I don’t really lurk anywhere too hard man, I just check the usual sites. I lurk on the Sidewalk forum a bit but other than that just Thrasher or tattoo blogs and shit like that really. The Internet’s taught me to learn how to take a joke, as you can’t see sarcasm over a keyboard. Also stop worrying if matey’s trousers are too high or your next guy just does tech tricks – it’s all skateboarding at the end of the day, enjoy all of it!

These days the Internet is so full of web-clips that it’s easy to get lost amongst it all – what stuff have you seen recently that actually inspired you and why?
– Well I don’t really like that much of what comes out of a lot of companies to be honest but what has caught my eye of late are all the GX1000 edits, Pillo wheels guys, Magenta, 5boro; anything that’s raw you know? No messing about – that’s what I like. Anything I can relate to really, that’s what gets me hyped for sure.

Imagine that you’ve discovered a way to travel back in time so as to be able to give your 15-year-old self some valuable advice: what would you say and why?
– I would probably tell myself to just try more new things, to get out there and experience what you can. Life is short and I have come to realise that of late.
So any trip or opportunity to go somewhere – just do it whether you have enough money or not, just get on it.

Is there anything else you want to say?
Firstly thanks to Sidewalk for this opportunity. Thanks to the old family; mum and dad, my sister, my girlfriend Kayleigh for putting up with me. Thanks to Rich and Makepeace at Skatecafe, Syd, Danny and Louie at fifty fifty. Tom Gillespie from Supra for keeping my feet covered, anyone that’s has helped me out. BCN crew, Aaron Rob, Titi, Swedish lot, Keynsham heads, Randy and Bollock (laughs) he’s going to hate that, and all the Bristol crew – you know who you are. 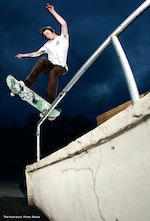 From Sidewalk – June 2014  Name: George Rea Age: Twenty Location: Bromsgrove Skating: 8 years        So you’re from the mighty town of Bromsgrove? When and why did yours and Kelley...

Sidewalk 213 – June 2014 Name: Robert Woodward  Age: Sixteen  Location: Huddersfield  Skating: 6 years         My fondest memory of Roon is when he did work experience at Endemic and took...

From Sidewalk – June 2014  Name: George Rea Age: Twenty Location: Bromsgrove Skating: 8 years        So you’re from the mighty town of Bromsgrove? When and why did yours and Kelley...

Sidewalk 213 – June 2014 Name: Robert Woodward  Age: Sixteen  Location: Huddersfield  Skating: 6 years         My fondest memory of Roon is when he did work experience at Endemic and took...

The two-bit boys have come through with this rad phone edit filmed on location at their beloved M32 spot. Check the edit below for a happiness...

The Odeon 11 in Sheffield, (just around the corner from the much more heavily sessioned Subway spot), were a proving ground in the stair-jumping early...