After a solid twelve months of out and out handrail annihilation, Cambridge lunatic Joe Hinson rounds off 2017 by releasing an all new section for his current seven-ply home, Darkstar Skateboards.

Put down that stale mince pie you’re currently nursing and pop the kettle on, as ‘The Hinse’ brings to the fore two and half minutes of street destruction that is certain to make your knees wince in fear. Watch on as Joe tosses his carcass at a wide array of ‘massive’ street furniture on his unrelenting quest to beat East Anglia and the Midlands into submission, filmed by a whole host of camera-operating humans.

You simply can’t rinse The Hinse – witness for yourself… 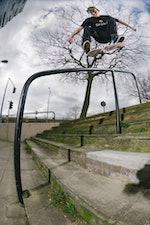 World wide spot domination, four wheeled dancing on the graves of their concrete enemies, heavy nasal thumbing at even the most tenacious of security drones...

Casper Brooker and his massive body.

A brief history of Nottingham's DIY Skateboard scene from the inside.