A new video from the Heroin camp is always an exciting prospect – especially when it’s heralded as a sequel to Magic Sticky Hand with the aim of introducing new riders to the team. Before sending Fos some questions about the release I wanted to see what Magic Sticky Hand 2 had to offer, which it turns out is one of the best distillations of skate rat-ism (yeah that’s a term) that I’ve seen in ages. Opening with a montage of the team members who don’t have sections in the video, a bewildering range of skating from Chet Childress’ pool destruction to Chopper’s creative approach to spot hunting has every skater in the room hyped. It also has the hipsters sitting behind me, who’d only turned up for a craft beer or two, thoroughly thrown off. 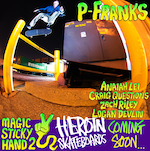 This confusion isn’t helped by Pat Franklin’s opening section, accompanied by hardcore punk and cheering from the crowd: astonished laughter from behind me gives way to, “What’s even going on? I’m so confused!”  Guns being fired, slams being taken and foots being planted – this definitely isn’t what the Olympic committee has planned as the face of sportsmanlike skateboarding. Anaiah Lee’s Siouxsie-scored section continues with the innovative gnarliness offered by P-Franks and shows exactly why he’s on the team. Zach Riley’s high speed all terrain assault and penchant for a good slam goes down a treat, as does a new dose of Craig Questions. A Camberwell rag in straight to “Oi, can your boyfriend do that?” directed at a passer-by captures skating with Craig perfectly; pure scum in the best possible sense. 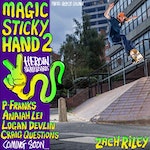 Closing duties go to former Welcome affiliate Logan Devlin, whose approach to skating fits in so well with the Heroin squad it’s like he was never involved with anyone else. If the combination of obscure 80s tricks, gnarly spots and discordant guitar music hasn’t got you convinced yet, then here are some words with Fos to give you reason to hunt the video down.

To begin with, what bought about the idea of having a sequel to Magic Sticky Hand to follow on from Bath Salts?

Well, the original Magic Sticky Hand video followed up Live From Antarctica (2005) and featured all the riders that had gotten on since that came out (Deer Man, Ault, Monie) or those who didn’t have a chance to put together full parts for LFA (Rogie and Fiske). I found myself in a similar situation after Bath Salts – we had three or four new guys and we either made three ‘Welcome to Heroin’ parts, or made it into a video.

Was it part of the original plan to have sections from already established team riders Pat Franklin and Craig Questions, or did the footage just build up organically?

Originally it was to have parts for Zach, Logan and Anaiah, then Pat wanted a part because he didn’t have one in Bath Salts and Craig’s happened because he’d been filming with his mates a fair bit.

With Heroin always having had a very specific feel to the team, how do you go about the process of finding new team riders? Zach, Logan and Anaiah all slot in perfectly in the new video it seems.

Anaiah was someone that I just skated with pretty much all the time for a year or two before we even thought about putting him on, that happened super organically and I think it was the same with Zach and the guys in the UK; we tend to know when we know.

You must have been stoked on Questions having some Stockwell footage in there, bringing things full circle back to 1999’s Good Shit – how much do you miss that park, and have you found anything that compares near where you are now?

Nothing will ever compare with Stockwell, it’s the best park in the world. I skate a park down the road from me now called Garvanza; it’s okay, a concrete outdoor park and has a similar vibe, people are pretty friendly and it’s in a historically sketchy neighbourhood. It’s decent, but nothing compares to Stockwell. Yeah, I suppose that’s where it all started. I love that place, I used to go in 1993 when nobody would ever go down there to skate because they were sketched out by the area. The surface was super rough and the biggest wheels at the time were 45mm, (laughing).

Following on from that, how much of a hassle was it to move operations to the States? Do you ever find it tough to keep up with the UK and Japanese team contingents?

No, Skype is awesome. I bought my mum an iPad when I came over here. So if a 70 odd year old lady in the hills of Lancashire can stay in touch through Skype and emails, then I’m pretty sure anyone should be able to. Japan is pretty much self-sufficient and I talk to Craig the most out of anyone, but we stay in contact on it all. Tom is kind of the point person for Heroin stuff there.

With such a wide spread of riders, how did the editing process come together? Were you particularly strict on riders filming in a certain format or was it more a case of sorting trick by trick?

Such a ball ache with the different formats right now. Everyone has different preferences, so it’s frustrating. Craig’s part mashed up VHS and HD, Zach’s part looked awesome in HD, but the rest was VX. Even moving forward with the next video I don’t know what to tell people to film in, I’d love to just be able to keep it all either one or the other.

What was interesting about this one is that each rider got to work with a filmer pretty closely. Like with Zach, it was him and James Craven that filmed his part and Jim got to edit it. I cleared the song with the band and made sure all that was good, but apart from that I didn’t step in too much. The same happened with Pat Franklin and Darien Brown, and Logan, they all got to work with filmers on their parts. I ended up editing most of Craig’s part.

The new video, like Video Nasty, features music from Leeds-based post punk group Eagulls – how did you discover them and what is it that has bought you back to using their music again?

My friend Conan actually sent me a mix a few years ago of bands we could maybe use – that’s usually how I go about finding music, reaching out to mates. Anyway, there was this Eagulls song ‘Possessed’ and I totally loved it and we ended up using it. Since then I found out that a couple of them skate and they would always hit me up when they came through L.A. I even took them shooting at the gun club here one time. Its rad they’re mates and it’s always good to see them when they come through, I really dig what they do.

What bought about the VHS releases of the last couple of Heroin releases, and how do you feel about the changing ways in which skate media is consumed with regards to Instagram, short sections and less hard copy releases of full videos?

I love VHS, and grew up watching those obviously. There’d be something wrong if you made a video called Video Nasty and didn’t make it on VHS – it’s fun, it’s a chance to do something different and, because we make so few of them, we tend to switch out a couple of songs for stuff we want to use but could never get the rights to. Then with Bath Salts I said, “We’ll make 120 and then that’s it” and they sold out, so I said, “well, let’s do 60 more” because people were asking about them and wanted them. There was still a demand, then those sold out and I only ever wanted it to be a limited thing, so when those sold out I was like “30 more and that’s all” – so there’s 210 of those out there.

With this one, its’ funny because I feel like DVD is even a push and that feels like a relatively new format to me. We took a risk with making DVD’s, I wanted to make it just so that we can have hard copies and sell it for the minimum that we could just to break even.  We’re going to do an iTunes release because it’s the first thing people ask about, and it’s just how kids are used to watching videos now. We still need to edit that, switch out a couple of songs because we couldn’t get those cleared. I’m working on that now. I didn’t want to burn the shops at all: I had shops saying, “What’s the point in getting DVD’s when it’s just going to be on Thrasher?” I see their point so we didn’t put it on Thrasher, what we did is work with the shops instead of against them; the screenings are all at the shops, the people that have supported us, its been really rad and fun to do it that way. We took a few team guys and went to all the ones over here and met the staff and the customers, it was really rad and I feel like it was a better way to do it. I wanted the shops to have a chance to sell through on the DVD before it was on iTunes – that was a conscious decision.  Shops are the lifeblood of skateboarding and need all the support we can give to them, it’s a hard enough climate anyway out there with all the online stuff happening.

New publication Vague Skate Mag have just set their website live and got things going with a bang, including an interview with Heroin's Zach Riley...

Nunroyd Skatepark, Yeadon - Raiders of the Lost Park - you can have fun on anything