If you spend your life staring into your phone, or feverishly refreshing Facebook fearful of missing out on seeing what’s going on outside whilst not leaving the comfort of your mum’s cellar, then you’ll probably already be aware that the Diamond Footwear team, (namely Torey Pudwill, Boo Johnson, Brandon Biebel, Jeron Wilson and Jamie Foy) were over in the UK last month.
With demo’s/appearances at Southbank and Machester’s Pump Cage making up the British leg of their European Tour, the boys were floating around both cities for a couple of days, street skating and enjoying themselves at the end of a two-week mission that saw them all over in France beforehand.

The clip above documents said Diamond European jaunt, with the crew hitting legendary spots throughout France, from La Defense, Republique and Lyon’s Hotel de Ville, then on to Sergent Blandan’s, before heading across the channel to England, where they session spots from London’s South Bank to Manchester’s Pump Cage in the North.
If this hasn’t sated your appetite for all things Diamond related – why not go check out our interview with Jamie Foy regarding his Deathwish x Diamond collab release that dropped last month, along with peeping the little clip that he managed to knock together in 30 minutes at Mile End?

If you scroll down – you can also have a look at some Seu Trinh photos shot during the UK Diamond visit and, if you’re lucky, spot your own gurning face in the crowds at Southbank, or even remind yourself of the nause you had removing that permanent marker from your forehead after getting a bollocking from your mum for letting an American pro skater write on your head. 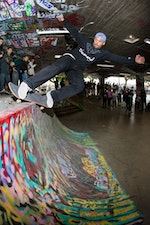 Biebs does a feebs with steeze, (at Southbank, to fakie). Photo: Seu Trinh

Fancy getting in on some of that Diamond x Deathwish collab gear? Done half the work for you.