We receive a lot of random emails on a regular basis but the one from Sergio Mejuta from Cream Prime ranks as one of the most unexpected yet. Cream Prime is a company based in the Basque Country who manufacture non-abrasive griptape branded as ‘CreamGrip’. Whilst their claim to be the first people manufacturing such a product is open to debate, (I remember earlier versions of this idea stretching back into the 1980’s) what separates this brand from previous ones is their USP in so far as the ‘Social Skate’ aspect of their business model.
When you live in prosperous countries with easy access to skate product it’s easy to forget the struggle of those who love skateboarding but are not in a position to replace skate shoes every couple of months. In this context, non-abrasive griptape makes a lot of sense and thus, Cream Prime have an arrangement whereby they donate a sheet of their CreamGrip to an NGO working with skateboarding in a developing country for every sheet they sell. Currently they have a relationship with SkatePal, Megabi Skate (in Ethiopia) and the umbrella organisation Skate Aid.

This brings us nicely onto what you’re looking at here, which is some coverage of their recent trip over to Israel and Palestine to skate and to meet up with the fantastic people working for the SkatePal NGO, based in Asira Al-Shamaliya, a village close to Nablus.
Along with meeting up with the SkatePal heads, the CreamGrip crew, consisting of Julen Arizmendi, Sergio Mejuto, Aritz Irazoki, Hector Heredia and Javier Boes, hit up various skateparks across Israel, (including Ashdod park in Tel Aviv, Jerusalem, Jaffa and Jayyous) along with some street spots that they stumbled across. 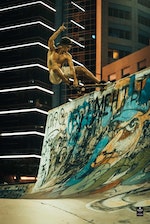 Anyhow, that’s the basics of the back story – watch the videos and peep the photos, all courtesy of SlamFilms (AKA Jon Sanchez Perez) and take a wander over to their site to find out more at: Cream Prime.