The 2018 UK Miniramp Champs Junior Qualifiers will be taking place on Saturday the 21st of April, offering the chance to get a place in this year’s event. Entry for the whole day will cost £18, with the comp running from midday until 4pm. If you feel like you’ve been harnessing the spirit of Cheese and Crackers recently and feel like a heavy miniramp session might be just the place to get hyped and start stomping blunt 360 flips, look no further than this event! 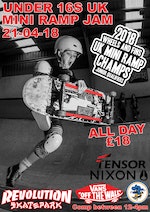 Wheels and Fins has been operating in Joss Bay, Broadstairs for the last fewyears now and last year took on the task of simultaneously hosting the UK Miniramp Champs – which, after a long running stint within the confines of Skegness’ long serving indoor skatepark X-Site, had been missed the previous couple of years. With the set up provided by the always killer King Ramps miniramp set up, the event was welcomed back with a vengeance and – despite various attempts by the weather to sabotage proceedings – the session went off and once the dust settled Alex Hallford, Jordan Thackeray and Sam Pulley were in first, second and third place respectively.

Check out last year’s Miniramp Champs at Wheels and Fins Festival 2017 in both photo gallery and video form.

“Wheels and Fins festival is an eclectic, boutique, music and action sports festival, located just an hour and a half from central London, with stunning ocean views. Now in its 6th year, the festival has gone from strength-to-strength since its inception, priding itself on showcasing amazing new live music talent, along with established names, and super-high production values.

Events include surfing, skateboarding (UK Mini Ramp Champs), the ‘Wall of Death’ and plenty of dancing by the sea across the two stages (main stage & dance tent). The festival has a daily capacity of 5,000 (15,000 over the 3 days) and provides camping spaces for visitors, all overlooking the ocean.

Located in such a beautiful rural setting and overlooking the ocean, W&F can truly boast that summery, laid back vibe and has firmly cemented its place as an intimate, independent coastal event not to be missed.”

Wheels and Fins Festival 2018 headliners announced - Faithless with a DJ set on Friday, Feeder on Saturday and The Libertines on the Sunday.