Wheels and Fins Festival 2018, alongside hosting the UK Miniramp Champs and a surfing event, also includes a solid amount of live music – for which the headliners have just been announced, with Faithless doing a DJ set on the Friday night, Feeder headlining the Saturday and The Libertines both curating the Sunday and headlining it. Peep more details via the flyers below as well as a press statement about the Sunday sessions. 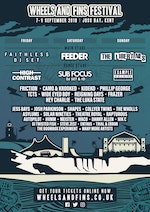 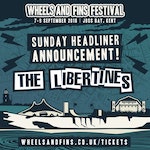 The Libertines are delighted to announce they will be headlining and curating the third and final day of the ‘Wheels & Fins Festival’ on Sunday 9th September at Joss Bay Beach (Broadstairs), just down the road from The Libertines new hotel / studio, The Albion Rooms, in Margate. The Libertines are curating a fantabulous cornucopia of musical delights and will provide the icing on their own cake (Editors note: I often ice my own cake, ooh err) when they close the festival with one of their typically rip-roaring performances. Tickets are available now priced at £25.00 from http://wheelsandfins.co.uk/tickets/

An exclusive stream of acoustic songs and chatter from Carl, Gary, John and Peter recorded earlier today at the festival site, is available to watch now if you subscribe to thelibertines.com.

The Libertines will be donating proceeds from their appearance to two local Charities https://aspirationscentre.co.uk/ and http://piefactorymusic.com/

In it’s sixth year, ‘Wheels and Fins Festival’ is an independent, mu-sic and action sports festival overlooking the ocean at Kent’s beautiful Joss Bay Beach. Located just 90 minutes from Central London, the festival runs from Friday 7th to Sunday 9th September. Named after the notorious smuggler Joss Snelling, Joss Bay beach in Broadstairs, offers one of the finest sandy beaches within an easy commute from all over the South East. The festival provides beautiful camping spaces for visitors overlooking the ocean. For more information on the festival go to http://wheelsandfins.co.uk/

Last year’s event, which you can also check out a gallery from.

The 2018 UK Miniramp Champs Junior Qualifiers will be taking place on Saturday the 21st of April, offering the chance to get a place in...