Following in the footsteps of recent Vans collaboration releases, (most recently the Vans x Spitfire collab), this Vans x Independent Truck Co Fall 18 collaboration collection is undoubtedly the most extensive to date, not to mention the release with probably the most wide-reaching appeal to skaters across the globe.
Without wanting to sound too “breathless”, I think it’s safe to say that, regardless of your chosen favourite amongst the extensive Vans Pro Skate range, you’re covered here.

Heading up the Vans x Independent Truck Co collection are two iterations of some of Vans’ most beloved silhouettes, along with a customised rendition of the recently released TNT Advanced Prototype shoe.

First up is the Vans Sk8-Hi Pro, coming in a canvas/suede green and incorporating a combination of traditional Vans branding and Independent’s unmistakeable cross logo on the rubber outsole.

Additionally, the Sk8-Hi Pro bears the Independent script logo on the heel panel.

Next up is a new twist on the Vans Slip On Pro silhouette, coming in an all-black canvas/suede mix and featuring additional ollie protection in the obvious high-abrasion area and checkerboard detailing on the insole. 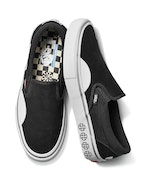 Again, the Slip On Pro features co-branding from both Vans and Independent as with the Sk8-Hi Pro across the entire shoe, with the heel panel bearing the Independent wave-form script logo in white.

The third shoe in this Vans x Independent Truck Co collab sees the recently released TNT Advanced Prototype get an update with metallic silver foxing stripes and rubber outsoles that exactly match the signature translucent and glossy orange hue that is unique to Indy bushings, along with a colourway that nods to the same. 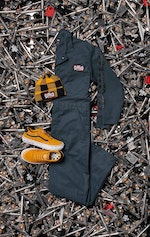 The blue-collar influence is strong with this collection and whilst I’m personally unsure about getting away with rocking the overalls down Sainsbury’s kerbs, if you’re a grafter, (or indeed an aspiring Patrick Bateman), looking to spice up your gear – you’re sorted.
The attention to detail on the co-branding is second to none too, incorporating a ton of clever combinations of the iconography of both brands throughout the collection.

Featuring an updated take on the Vans Versa hoodie and Authentic Chino pant, in addition to signature woven flannels, T-shirts, coveralls, socks, and trucker hats, the Vans Independent apparel capsule represents the classic skate uniform, complemented by custom Vans and Independent logo graphics to tie it all together. 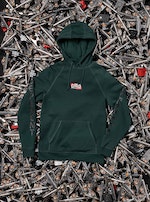 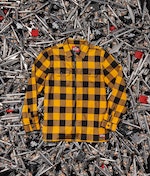 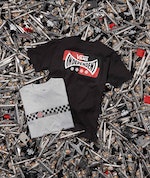 The Vans x Independent Truck Co. collaboration will be available online and in select retail stores across Europe from August 22nd.

Product Toss: My Set Up with Helena Long

Product Toss: My Set Up with Helena Long