You might have heard some noise recently about skateboarding’s own child prodigy Nyjah Huston and his upcoming Nike SB pro model shoe.
Even if you managed to miss his recent appearance on The Nine Club where he talks about the process behind the design, then you definitely saw his truly jaw-dropping ‘Til Death’ Nike SB video part that dropped yesterday, right?

Unless you live on the moon you will now be even more aware than you already were of this 23 year old’s monumentally insane skateboarding abilities.
Kinked rail crook grinds to nollie flip out? No big deal.
Switch front feebles down skateboarding’s most infamous 16 stair? Again, no big deal.

The release of the Ty Evans produced ‘Til Death’ section (which you can see below if you’ve managed to miss it so far) was timed to coincide with today’s global release of the Nike SB Nyjah.

As the man in question explained himself during his Nine Club interview, the Nike SB Nyjah skate shoe has been designed to occupy a new place in the pantheon of skateboard-specific shoes. Utilizing Nike SB’s skate-specific Free sole construction, designed to expand and contract with each push and movement – the Nyjah skate shoe offers a new approach and one which evidently works perfectly for skateboarding at its highest and most progressive level.

As Nyjah himself puts it:

“The most important thing to me was immediate break-in and longevity, because I like to skate my shoes for a long time. The front had to be thin and close to the foot to give you better connection to your foot and better connection to the board. You need your shoe to feel worn in but still maintain the right flick and feel right on your board.”

This has been achieved through a marriage of the Free sole construction and the incorporation of a new synthetic upper material designed for flexibility, comfort and board feel whilst upping the ante on durability. 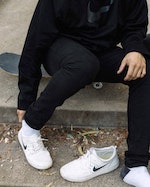 “The solution was a new material rubber upper – I expected we’d go with suede because that’s what I’ve always skated in, but we tried it, and it was so legit. Honestly perfect. It’s really thin, so it only takes a day or two to really break in. But it takes a long time to rip and I think that’s important for kids out there. They want to be able to skate in their shoes for
a while.”

With two years of research and development behind the shoe, not to mention the evidence provided by his own skateboarding, Nike SB and Nyjah feel as though they have come up with a completely new take here, presenting a shoe that incorporates the best of their skate shoe legacy and updates it with innovative new materials to concentrate on both board feel and durability.

With the release of the Nike SB Nyjah, young Mr Huston joins a elite roll call of skaters previously awarded their own pro model by Nike SB including Eric Koston, Paul Rodriguez and Stefan Janoski.

The Nike SB Nyjah releases globally today via selected retailers and on nike.com

Digging in the crates for the second Quasi x Vans release

The clip to accompany the Nike SB x 18 collab drop