After our recent Vanishing Point article honouring a handful of UK bred seven ply talent that helped shape skateboarding on our little island between 2000-2010, we decided to try catch up with some of those featured in order to bring you up to speed on where they’re at right now.

Kicking off these sort of follow up interviews, see below for an up-to-date chat with the one and only Aaron Sweeney!

I remember winning quite a lot from the TXOTX thing, and for once in my life did the sensible thing and used that to pay for college. 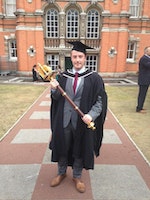 I remember having a conversation with you round about 2008 where you said you were contemplating starting to study medicine. How long before starting studying did you start to really consider your course as an option? And when did the studying actually begin?

I can’t quite remember the exact date but it was sometime around the TXOTX (Volcom contest) in 2010. I had been to an interview to do A-levels again, got in everything was all well and good until they told me how much the course cost, and it didn’t seem like I was actually going to do it.

I remember winning quite a lot from the TXOTX thing, and for once in my life did the sensible thing and used that to pay for college.

For the sake of clarity, can you please tell us what your course was called, what it entailed and where you studied?

Yeah it was BSc Biological Chemistry at Royal Holloway University of London – which, by the way, is not in London. In fact it’s in in the arse end of Surrey in a place that vaguely reminds me of hell.

It involved all sorts of stuff, but the things I enjoyed the most were the chemistry modules which involved analysing the effects of cool drugs and chemicals on different biological processes, bio-physics which involved a shit ton of math and we got to play with cool machines, most of which have lasers (always a good way to get over a hangover…playing with lasers, not so much the math) and bioinformatics, which involved a lot more math and the use of computer software to analyse large data sets from high-throughput analysis of genes and gene products to give annotation of characteristics to un-annotated genes and gene products, and further direct laboratory analysis.

Which, in non-dickhead speak, translates roughly to – “someone did some thing cool, got too much data to handle and instead of going through one by one to work out what everything does (‘cause…fuck that) we used a computer and a bit of math to guesstimate what was going on, so that the dude that originally got the data knows what he should put effort into, so that he can go for a drink at the weekend instead of being stuck in the lab aimlessly trying stuff.”

What was it that inspired you to take that specific course then? I guess that came as a surprise to a lot of people, right?

Well the original plan was to study for my medical bachelors and become a doctor, which was mostly inspired by shit I had seen on TV, then during my A-levels I managed to get the opportunity to shadow a junior doctor and see what life as a doctor was like…that’s when I discovered being a doctor in a hospital was not for me. You have to work way too many hours and deal with all sorts of shit.

However, I did really like chemistry and biology so wanted to stay along those lines, so I decided to do biological chemistry, purely because it had the words biology and chemistry in the title. At the time I started I still had no idea what the course was about but assumed it was very much a ‘Snakes on a Plane’ situation, where the actually content couldn’t possible be too far off the title. Thankfully I was correct!

Yeah I think most people were quite surprised, especially considering I didn’t (and still don’t) come across as the sharpest tool in the shed. However, most people were encouraging, after the initial “sure you are!” reaction.

So you graduated this summer, right? What’s next for you? Have you got any work lined up or are you studying further?

Yeah, I managed to graduate with First Class Honours; hella stoked. I’m currently interning for a pharmaceutical company called Fresenius out in Germany, working in the pre-clincial R & D department. I worked for them for three months during the summer of my second year and they for some reason invited me back this year, which was rad.

I’m starting a MSc in Experimental Pharmacology and Therapeutics at UCL (finally back to civilization!) in September then hopefully a PhD after that.

My plan is to keep studying until I run out of qualifications to get. 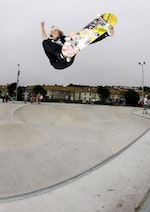 My plan is to keep studying until I run out of qualifications to get.

So back in the late 2000’s you seemed to be at every event and on any tour you could make – was it always in your mind that once you started studying the constant skate mission would have to take a bit of a backseat, or was that just how it panned out when your course started?

Not initially, my plan was to keep skating whenever and wherever I could. However after my first year of A-levels I realized that was not going to happen, which sucked of course, but I just had a lot of work to do and especially at that stage where it was learning foundation stuff, I knew the better I was at that the easier the harder topics would be; kinda like how skateboarding is as well.

Since I had decided that this was what I wanted to do, skating took a back seat, but I still managed to skate at weekends and whenever I could. Then when I got to uni I didn’t really even get the chance to do that, partly because I had so much work and partly because I was stuck in Surrey with no one who skated, and it was an expensive mission to get to London and skate.

The only chance I got to really skate was the summer…sad times. However, now I’m studying in London it’s back on.

What was the last skate trip you went on? Where to, who with, etc…?

I can’ really remember but I think it was with Marcus to Barcelona to stay at Paulo’s house and film my section for Antiz during the first year of my A-levels, but because I hadn’t been skating as much as I normally would and partly/mostly because I got pissed a lot, I kinda whacked out. Which sucks; in retrospect I should have fully gone in.

I’ve seen you pop up on Instagram from time to time – am I right in thinking you’re still skating? If so, what’s the likelihood of the world seeing another Aaron Sweeney section?

Yeah I’m still skating a bit; I’m currently in Frankfurt where there’s a really nice concrete bowl so I’m skating that at the weekends. As far as another section goes, it would be nice if I got enough time but I doubt I will in the foreseeable future.