Vague Skate Mag Issue 4 will be halving the party between two separate cities and launches this month, with one taking place in London and one in Sheffield. The London launch will take place on Saturday the 23rd of June at Forest Road Brew Co. in Hackney, with an exhibition from Joshua Perkins and music from Faruso and Jin, while the Sheffield launch will take place on Saturday the 30th of June at Hop Hideout on Abbeydale Road with music from the 30 Stax.

Both launches will see premieres of a new UK HUF video entitled Indecent Exposure going down and we imagine that both will see plenty of pre-event skateboarding options for those visiting for the events. If previous launches are anything to go by then we imagine some variety of free beer will be available, and proceeds from Joshua Perkins’ exhibition at the London launch will be going to SkatePAL – scroll down to read more about them and what they do and check out the volunteering section of their website for the chance to help out. 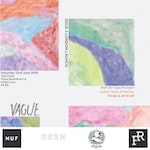 SkatePal is a non-profit organisation that works with communities throughout Palestine to enhance the lives of young people and promote the benefits of skateboarding.

Since 2013, our ongoing presence and award-winning projects have reached hundreds of young people across the West Bank and won acclaim and recognition from supporters around the world.

We are run by a committed team of local and international volunteers who, through teaching skate classes, building skateparks and providing equipment, are enabling an ever-growing number of Palestinian skaters to empower themselves and inspire the next generation of Palestinian youth.

More than half of all Palestinians living in the occupied territories are under 21 years old.

Yet for many young people across the West Bank and Gaza, cultural, educational and sporting opportunities are severely limited.

Help us support the fast-growing skateboarding community in Palestine.

Skateboarding is one of the most inclusive sports in the world. It instantly dissolves barriers between class, race, age and gender.

Skateboarding isn’t hierarchical – it doesn’t matter if you’re a beginner or a professional, a child or an adult.

Carve Wicked representatives Sox and Dannie Carlsen make the most of Copenhagen Miniramp's lengthy confines in this new clip from Tidy Mike and Vague Skate...