Vague Skate Mag Issue 2 will be celebrated with launch parties in Manchester and London, doubling up as the premieres of the UK Etnies team video.

Manchester will be kicking off on November 25th with a jam at the Pumpcage, followed the launch itself at Alphabet Brewing Co.

This will be followed by the London event, which eschews the skate jam and goes straight into the boozing at Village – however you’re in Deptford, so we’re sure you can use your imagination and find something to skate beforehand! 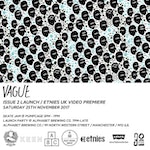 Dale Starkie tries to focus his own face...

"I need to try that again when I'm wearing underwear."