Check out a sneak peek of Unconcrete Architects, an upcoming show by Mathieu Claudon and Etienne Bouet taking place in the French Basque Country in June. With artwork paying homage to some of skateboarding’s greats, the work on display takes portraits of certain familiar skateboarders and places them within an artistic rendition of the architecture their skateboarding is most associated with. Guests at this year’s events are Steve Caballero, Christian Hosoi, Tony Alva and Adrian Lopez and it will take place from Thursday 14th to Saturday 17th June as part of the Wheels and Waves Festival, Pasaia San Pedro in Biarritz.

Get more of an idea of what is to come via the press release below and some examples of the artwork on display!

French artists Mathieu Claudon and Etienne Bouet reveal a pre-production of their new project “Unconcrete Architects“. As it was with their previous exhibition “Red XV” in 2017, the starting point for this one is the connection between architecture and skateboarding – the latter considered as both an art and a culture. This time it’s the spirit of watercolors used by the designers and architects of the beginning of the 20th century which is the project’s guideline. 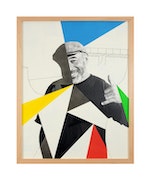 Based on photographic portraits, skateboard legends of the 80’s such as Steve Caballero, Christian Hosoi, Eric Dressen and Ray Barbee are represented within a framework representing their preferred skateboarding medium. Here, these iconic skaters are considered as ‘architects’ of skateboarding much as Le Corbusier, Gropius, Aalto or Eames are in their chosen fields. Both artists pay tribute to the idols of their youth and related historic spots. Mathieu Claudon and Etienne Bouet play with the limits between contemporary and urban art; on the one hand by their approach reminiscent of the artists of the years 1920 to 1950 and, on the other hand, by using current techniques as industrial painting, spray painting and posca. An importance is placed on the effect of transparency of watercolors to preserve the grain of covered surfaces, letting the effect of the materials take centre stage visually.

The spirit of modern architects, Finn Juhl and the Bauhaus, is not very far away. Mathieu Claudon and Etienne Bouet manage to tread the line between classicism and modernity with their work.

His interest is mainly focused on contemporary art, architecture and photography. Artists from different universes such as Roy Lichtenstein, Le Corbusier, Boris Tellegen or Tilt inspire him.

Recently, he also made two books about skateboarding : Skateurs Ordinaires and Paris, Skate in the City (mixing Skateboard and parisian architecture).

Red XV exhibition is a turning point in his reflexions. For this contemporary art project, he starts painting red and black color fields on Mathieu Claudon’s pictures. Coloured works of the new series are the obvious result of this collaboration.

Mathieu CLAUDON is a parisian photographer.

He’s specialized in skateboarding black and white pictures. Paris , Skate in the City book’s release confirms his talent thanks to these pictures of the french capital.

Advocate photographer for Electric California (France), put forward by Lomography for his Petzval lens and contributing photographer for The Skateboard Mag ‘s magazine, he goes on evolving and expanding his photographic world. Recently, he exhibits in the parisian Obey Pop up store, a dozen pictures of Shepard Fairey’s coming in Paris and works. With Red XV and now Unconcrete Architects, his work about perspectives and lines tends to create a simple but powerful mood.

Now in its 15th year - the Vans Pool Party serves up the carnage...again

Transworld Skateboarding have come up with a proper treat this week, with an upload on April the 11th of the nothing other than 411VM Issue...