Arriving late after the standard Friday night gridlock on the M5 I made my way towards the aforementioned BBQ ready to fill up before things got messy I noticed Jake Collins battling with this slippery frontside pivot. No BBQ for me then… as soon as I could get my camera gear set up and nestle myself next to James ‘Danger’ Kenning, one of Shiner’s in house filmers, Jake was getting his back axle to stay in one place long enough to pop back into the tranny below. 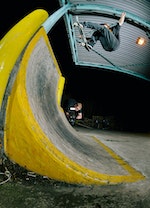 Being close enough to the BBQ and, more importantly for many, the fridges that were overflowing with free booze, the whippy quarter remained the focus for the majority of the evening. The Welsh had crossed the Severn Bridge en mass to pillage, claim cash and drink beers as they dismantled this thing one trick at a time. Tom Bailey styled out a frontside tail block whilst Chav Dan cruised through a variety of pivot variations. Having done just about every lip trick that this thing would allow, it was time for Sam Pulley send himself towards the rafters. 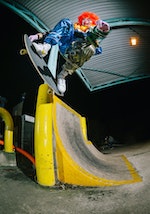 Now I know what you’re thinking. This is meant to be a Halloween Jam, where’s all the fancy dress? It’s right here! Going 110% as ever, Dan Cates made his way from Margate in Kent in order to don his trademark clown suit and skimboard and remind everyone to think outside of the box. To say this photo was sketchy to shoot is a massive understatement. A few close calls with the skimboard, my fisheye and my face later, we were successful.

This set up was sketchy as fuck. The run up was in near darkness and you couldn’t see the downhill run out as it was obscured by the Creature tent and generator spotlight beaming right into your face until you pretty much landed on it. Tom Kinman kicked this off with a frontside ollie, followed shortly by a faultless impossible tail grab that Ed Templeton himself would be proud of. Harbouring a broken wrist, James ‘Griff’ Griffiths left his camera at home this time and steezed the fuck out of this Wu Welsh-esque kickflip.

With cash still up for grabs and a shit load of beer waiting be to drunk, the final session of the night was on the ‘way harder to skate than it looks, especially at night’ quarter pipe. Bristol locals and all round good dudes ‘The BLK’ and skate encyclopaedia Pig Dog got things going whilst Jess Young rearranged the generator and lights in order to find a way through with his feeble grind, off the end and into the impending darkness.

Known for turning it all the way up to 11 and more often than not leaving the session written off or in an ambulance, Joe Habgood made it his mission to pop the back wall cherry. Compiled from plywood and two-by-four timber, the yet to be tested structure was no match for the force that Joe subjected it to. Having nearly snapped the backboard in half which ended up in that big old skip behind it, Joe had to screw in some supports to get this thing done.

With things as secure as they were going to get, Joe continued his assault. Avoiding time in the blue bin or a snapped board on the way back in, Habgood ended the session and full stopped this year’s Halloween Jam.

Endemic skatestore come through with another truly mind-boggling 'skatepark'

Hitting everywhere from Cornwall to Scotland in classic Kinetic fashion...

Enniskillen, Bundoran and Dublin with Grove, Conhuir Lynn and more!

We have more of Oliver Birch's Liverpool scene video 'Beef Stew' exclusively today, in the form of Rauiri Jones' excellent Siouxsie and the Banshees' scored...

Helena Long curates her favourite webclips for y'all