Our friends over in Huddersfield put on a Skate Jam last weekend at the venerable Greenhead Skatepark just outside the town centre to celebrate the continued efforts of the Mash Life crew and Endemic Skatestore to keep the hype high as the winter draws in.
Tim Smith was on hand to snap some photos and Mash Life commander Nathan Page filmed a little edit, which you can see below. Big love from all of us to the whole Huddersfield collective for everything they do for the love of their local scene. Big up Mash Life!

Here’s a little recap from lens man and motivating force Nathan Page on what went down.
Peep the photos and get organising for yourselves.

“With a few crates of beer, £20 quid in cash and some madness from the mind of Kieran McDonnell to give out (including soup), it was sick to see the entire scene turn up and give Greenhead Skatepark a good seeing to. Our loose plan quickly went to shit as we realised it’s impossible to shout at a group of skaters without a megaphone and really, no one gives a toss about organisation anyway, do they? Everyone smashed the park and a massive thanks goes out to the ATB Collective guys who made the drive over from Blackpool, even though rain was on the forecast. Another one will definitely be coming in the new year!” 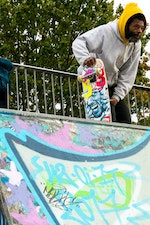 Long-time Huddersfield ripper Kieran McDonnell made the trip down from his new home in Barrow to treat Greenhead’s flatbar to a locked in feeble. Photo: Tim Smith

Adam Kay and Blackpool’s ATB collective aren’t scared of a roadtrip. Noseblunt slide on the other side of the M62.
Photo: Tim Smith

Greenhead’s fun box is massive by 2017 standards but Josh Whitehead is a lunatic so it didn’t matter.
Boneless one over the lot. Photo: Tim Smith If you could bottle Felix’s enthusiasm for skateboarding and sell it, you’d be a millionaire.
50+ years deep in the game. Tailblock with boozy BGPs. Photo: Tim Smith We catch up with the Brighton based shredder and Level local

A Sheffield based Champagne Supergrover takes on the UK all the way back in 2006.

The younger of the two Adam brothers rips!