Corner Store is a Heineken fuelled UK  skate scene video in the works for the last year and a half odd, which will premiere at House of Vans on November 10th. Featuring Stevie Thompson, Sam Roberts, Jono Coote, Jordan Thackeray, Filippo Baronello, Sox, Evan Binge, Taylor Jones and more.

An independent scene video heavily influenced by cheap off license deals, obscure Jonathan Richman songs and the intro from Paul Silvester’s ‘In Motion’ section. After party at the tunnel next door, Southbank or whatever other pissy hole we can drink streeties in. Peep the trailer here.

Filmed and edited by Jono Coote. 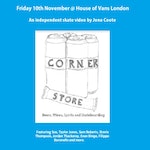 The House of Vans All Girl Skate Jam, the first girls jam to take place in the Waterloo tunnels, will be taking place on Thursday...

Brought to you by the trusty handicam of Jono Coote.

Felix Parker, Jake Snelling, Ross Brunton, Chris Ault, Dean Greensmith, Evan Binge and more make the most of one of the best events on the...