Dean Lane Hardcore Funday is an annual skateboarding event that has been held at the infamous Dean Lane Skatepark in Bristol since 1999, though events have gone on here since the 80s. In a similar spirit to Livingston Pure Fun and Night of the Living Dead, it is grass roots and half-jokingly for “locals only.”

This year we saw wooden jump ramps, kickers on top of kickers, and sk8wine dressed in full Olympic attire. Watching downhill skating as big Jeff head bangs along to a lady spraying water is always going to be entertaining, as was the flurry of tricks landed towards the end of the day when most had had their fill of Polish lager.

For 2016 we spoke to some of the people who have long been associated with the event. What follows is a brief look at some of the stories, posters, and ephemera from earlier years.

“The maddest has to be the 15 years anniversary, when the Thrasher crew were in town. That was the biggest crowd since the 80s and it was amazing to see Raven and Grant destroy the quarter and put down some mad stunts & NBDs on the previously fairly untouched ‘massive lump’ section. Ryan Price too! Then as dusk rolled in Div and Ronnie Sandoval started on it. Eggplants in the dark on a kinked slab of concrete!? P-Stone’s barbecue was a surreal addition too!

Also, Joe went on to almost make a backside disaster on the massive lump, but horrifically smashed his elbow to bits. On the plus side, Thrasher Instagrammed it, and it got more likes than Grant Taylor that day!

Other than that, the huge crowds when Natas & Jesse Martinez demo-ed in the 80s were insane (and Dressen, Hartsel, John Thomas & Danforth’s demo, although I’m not sure that was technically a Fun Day?). I’d estimate about 100 kids followed Natas to the chip shop and peered through the window to see if he bought curry sauce.” – Pig Dog

“Radio FTP (For The People) was a pirate radio station that put on the music for one or two of the O.G. Fun Days. One year they had some wicked reggae dude on, while Spex was blasting judo airs over a Mini they’d parked at the edge of ‘third bowl’.

A lot of the Bristol skaters had ties to the trip hop and rave scene in those days – Wild Bunch / Massive Attack, Smith & Mighty, Fresh Four (Youtube ‘Fresh Four Wishing on a Star’ to see their Bristol skating pop video) etc. Jody from Way Out West was a rad skater back in the day!

Even before that, in the mid to late 80s, when Bear Hackenbush and Bingo from Skate Muties were involved it was all DIY punk and crustiness!” – Pig Dog 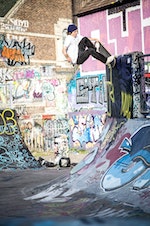 “One of the DLH stickers is from Raymond Pettibon the New York artist. We got some of his images which were used for Off, the hardcore band, and changed them into our logo. We used his images because Bedminster’s full of fucking lunatics, a lot of the original DLH crew were a bit mad or fucked. One time we went to see the singer from Off and were like, ‘oh Raymond Pettibon endorsed these t-shirts,’ which he didn’t at all, and even managed to get the guitarist to wear one on stage when they played Bristol. So the guitarist wore a DLH t-shirt – that was nuts.

Off were a big inspiration for how the DLH logo changed, it started as an old English font. Since then the Sleaford Mods have worn the t-shirts, and Bad Religion, some good bands.” – Dylan Lewis

“When Percy from Document lived here we were good friends, and he did a thing for Document called hang ‘em high. All of us brought our old boards down here, like hundreds of them, and we would put them in the tree, and BMX frames. You came through here and it was all boards and shoes hanging from the tree, and then the council were like, ‘we aren’t having this,’ so they pretended that the tree had a disease and cut it down” – Dylan Lewis

This year’s DLH Funday was a rad day out, for skaters and hardcore enthusiasts alike. Come along next year and share a cider under the hot air balloon covered skies of Bedminster.

Dylan would like to thank the following people for their help making the event possible: “Flip and all DLH crew past and present, you knows who you are. Ta to product tossers; Shiner; Fifty Fifty; Vans; Rock Solid; Brixton; Keen and Third Foot for the boards. Cheerz.”