We’re here on Go Skateboarding Day as part of the celebrations in London, where you’ve visited before right? – It’s my third visit to the UK, but every time I come it’s only for two or three days…I’m living it with this weather man, I wish I could have more days!

And where have you been the last couple of times, just London or further afield? – Just in London, I skated Southbank and that was pretty much it – but at least I can say I’ve been to Southbank.

When you first moved from Brazil, it was to Barcelona right? Do you ever miss living there compared to being in the States? – Not really – I mean I get to go visit every year, stay there and see my friends and the city. I feel like I enjoy it more now I don’t live there than when I did. I like living in the States, I like the mellow vibes and I’m not really into partying super hard.

Above – Carlos gets stuck into a switch frontside feeble.

How did you meet P-Rod and how was it being picked to be part of the Primitive team from the start? – Oh man, it’s an honour! I’m very grateful for that. I met Paul on my second day in California when I first went. He was playing Rodrigo TX at a game of S.K.A.T.E., he lost actually too. We skated all day, he was riding for Plan B at the time and he hooked me up getting boards from there – so he’s had my back from day one! The Primitive team, he told me before he even knew the name of the brand that it was happening and I was down 100%. Whatever he does, I know he loves it and he puts his heart into it.

Since then the team has grown from the original three riders, you, P-Rod and Nick Tucker. Who on the team have you been skating with a lot recently? – It has! It’s so good to see the brand growing too, I’m super stoked. It’s growing even faster than my expectations and of course I had big expectations with it being Paul. Having Shane (O’Neill), on the team, Diego (Najera) now, my friend Trent (McLung) – when I first went to Cali I skated with Trent a lot, so to have him on the squad is dope.

And how was it finding out that the elusive Bastien Salabanzi was joining the squad? – Yeah that’s insane! It’s great that Paul had the opportunity to make that happen, bring back Bastien – and Devine Calloway too! He’s one of my favourites too, I’m hyped to see him back on a board.

In 2015 you dropped three parts – a Primitive section, Berrics Battle Commander and section for LRG’s 1947 – in three months. How was it organising that and dividing footage up? – It was pretty hectic, but for the LRG project we’d been filming for about three years for and had been on a bunch of trips – three times to China, twice to Cyprus, so there was some old footage in there two. But at the end of 2015 when I was filming for Primitive as well…I guess I kind of just went with the flow, whatever I got. Not repeat the tricks, so I could say ‘OK, this goes to this, this goes to that…’

Above – Carlos switch flip nose manny nollie flip as you do.

More recently, your ‘Juice’ section dropped more than a few jaws. Where do you see the future of skate footage with regards to standalone web sections vs. full length videos? And, following on from that, are there any plans for a Primitive full length in the works? – I mean I love full length videos, I’m a skate nerd and I love sitting down and putting on skate DVD’s, but it’s just so fast now…I don’t know man, I really hope we can keep the full length video going. With Primitive we want to, I really want to see a full length Primitive video. I guess we’ll just wait and see, maybe Paul will set it up. I know he’s sitting on some dope footage too, so something good is going to happen!

And you guys are pretty on it with the online promo format as well… – Yeah that’s going ahead, there’s another video dropping very soon and another two or three in the works. Promos like that…but hopefully there’ll be a full length, hopefully we can make that happen.

Finally, what’s next travel wise? – After this I’m heading back to Barcelona actually, because I’m having some visa issues with getting back into The States. I’m waiting on all that so I’m going to go to Barcelona because I have mad homies there. Skate around with my friends, wait around for this to be sorted then go back to LA…and of course Copenhagen for the CPH Open. That’s the plan pretty much, as well as filming for the new Transworld video when I get back to LA. That’s going to be sick, I’m sharing a part with my homie Tiago so I’m hyped on that!

Above – Casper frontside blunt in the sweatbox.

Above – David Jakinda with a moody frontside flip. 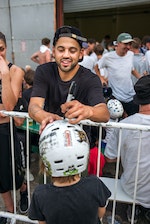 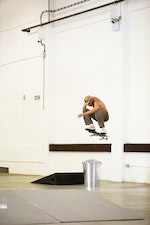 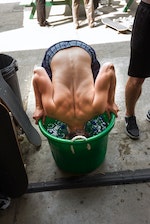 Above – Korahn Gayle wallies over the lot. 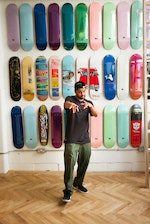