This weeks city based interview comes from DC UK rider and Motive Skateboards pro Leo Smith – check out his insiders guide to Truro life below now, with a quick clip at Leo at Truro Plaza at the bottom of the page. 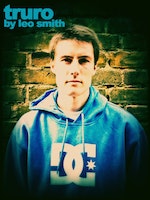 Best breakfast spot: The Lemon Tree.
Best form of transportation: I would say my skateboard but for one it’s a little too obvious of an answer and two it’s too rough and hilly anyway. I would say my gorgeous Peugot 106! Very reliable.
Best skate shop: SJZ Skateshop
Best record shop: There’s a very small independent store in town that’s really original, cool and quirky that I’m sure people have never heard of, it’s called HMV. Heard of it?
Best band: I’ve been listening to a lot of tracks from The Whispers. Jody thinks I should be questioning my sexuality.
Best album: Fleetwood Mac – “Tango in the Night”. It’s a classic
Best local video: Wide Eyed World – by Jamie Turnbull. I watched this a lot as a kid. Urwin is the boss in it!
Best video section: My bros sections in ‘Six’ and ‘Seen’.
Best local – back in the day: With out a doubt it was Tim Tremaine! Killed it! Looked up to him when I was younger. Feeble grind master!
Best local – present: Stu “Surf’s Up” Titmus. He’s been consistently amazing for so long. Jolly nice chap too.
Best skate spot – back in the day: The Truro Museum was a sick spot. It was a plant pot gap over a wall to drop outside the entrance of the museum. Myself and Jody had a twin “Haunts” in an old Sidewalk mag and I think we had photos at that spot. Really good, fun spot.
Best skate spot – present: I kind of like the double banks just passed the Tescos. It’s a pretty sketchy spot and I know a lot of people hate it as you can fully fook yourself up skating it, but it’s cool when you get something on them.
Best undercover spot: We used to skate the C&A loading bay when it rained as it was the only undercover spot. It was a proper crappy 4ft drop onto the roughest ground.
Best skatepark – back in the day: Mount Hawke Skatepark was the only skatepark we skated back in the day and still do this day as it’s always been amazing. Even when it was outdoors and was literally five or six obstacles.
Best skatepark – present: See above answer.
Best bar: Zafiros Bar – Good atmosphere and friendly vibe. It’s a family run business who I know make a real effort welcoming people.
Best nightclub: Office Nightclub – it opened a couple of years ago by the same family run Zafiros and has become really popular. Definitely worth checking out.
Best restaurant: Without a doubt it’s a place called Kathmandu. They do the best Nepalese and Indian food and I don’t think I’ve been to a more welcoming restaurant. The guy called Sunny who works there is such a legend.
Best local slang phrase: “Get on Shag!”
Best point of local interest/tourist must see: Probably the Truro Cathedral, but to be honest the skate plaza has become more of a tourist attraction.
Best local celebrity: The guy who’s in a wheelchair from Holby city. See him a lot when I’m out.
Best thing about living in Truro: It’s probably the most chilled city in England.

http://mpora.com/videos/XNnYSsR8D The SJz team get infected by the Samhain spirit down at Mt Hawke skatepark in the latest Cornish edit from Matt Hunt, smacking...

This Sunday we head on down Sussex ways, more specifically to Brighton, as we bring you Louis Coopers banger of an end section from the...

http://mpora.com/videos/IJMlfOUsv The third teaser for the upcoming SJz shop video is now online, with Jody Smith battling out his first trick since recovering from...

http://mpora.com/videos/XNnYSsR8D The SJz team get infected by the Samhain spirit down at Mt Hawke skatepark in the latest Cornish edit from Matt Hunt, smacking...

This Sunday we head on down Sussex ways, more specifically to Brighton, as we bring you Louis Coopers banger of an end section from the...

http://mpora.com/videos/IJMlfOUsv The third teaser for the upcoming SJz shop video is now online, with Jody Smith battling out his first trick since recovering from...

We take you back to the early 00’s this morning, as we bring you 6 and a half minutes of park antics from the “Sorry”-era...

http://mpora.com/videos/W737VELDo Truro’s long time SOS brings you another snippet of hype for their upcoming shop video, which is set to feature the likes of...