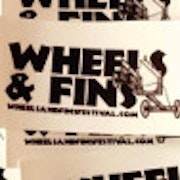 Founded in 2012, the first Wheels and Fins festival at Joss Bay Beach in Broadstairs, Kent was a resounding success, with great attendance and huge support from the local community. The event is built around live music and DJs, and also features stand up paddle board demos and a fun race, a beach volleyball tournament, an epic soapbox derby, plus a skateboard mini ramp competition and demos, and slalom and downhill races.

This free festival was the brainchild of Joss Bay Surf School’s Dave Lovett and Dave Melmoth, who organised the first edition with a group of their friends and friends of friends. There was a fantastic atmosphere over the weekend, with around 5,000 visitors to the site.

Lovett and Melmoth were joined in 2013 by the UK Skateboarding Association’s Nic Powley, when the event was bigger and even better before, with a pro/sponsored prize purse and a huge mini ramp supplied by King Ramps, much wider than the previous year. There was also a guest appearance from Santa Cruz legend Eric Dressen, who witnessed great skating from riders such as Trevor Johnson, Bailey, Dean Robertson, Dan Hill, Denis Lynn and Greg Nowick.

The 2014 Wheels and Fins festival will take place between 12th and 14th September and organisers are planning to provide even more activities, sports and live entertainment than before. It is hoped that around 15,000 people will attend over the three days, making it the biggest event of its kind in the area.

View More Wheels and Fins
5 years ago | by Jono Coote 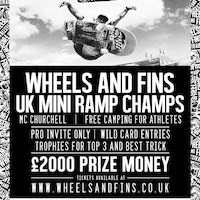 Wheels and Fins Festival 2017 will be taking place at Joss Bay in Kent from the 8th to 10th of September this year, with the added bonus of doubling up...
9 years ago | by Ryan 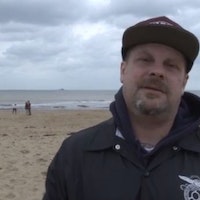 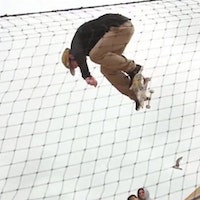 The second part of Pixels‘ coverage from the Wheels and Fins festival at Broadstairs, Kent, is now online, featuring more mini ramp beach antics from the likes of Nick Roberts,...
9 years ago | by Ryan 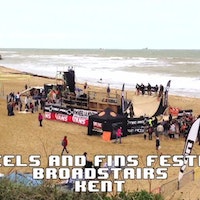 The second annual Wheels and Fins Festival took place at Joss Bay in Kent over a grey weekend in September, with the midi/mini ramp set up getting a heavy sessioning...
9 years ago | by Ryan 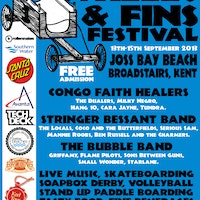 The Wheels and Fins festival is returning to Joss Bay Beach in Kent this coming weekend, for another year of skating, live music, soapbox derby, downhill carnage and more! On the...
9 years ago | by Ryan 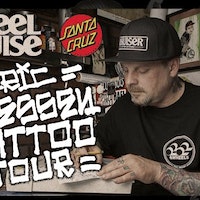 Santa Cruz and Heel Bruise have teamed up to bring the Eric Dressen Tattoo Tour to the UK! Over the 10th-16th September, Eric will be visiting various cities around the UK...
10 years ago | by Ryan The Wheels and Fins festival is back, and is shaping up to be bigger and better for 2013. Dates are 12th-15th September on Joss Bay Beach in Broadstairs, Kent. This year...
10 years ago | by Ryan 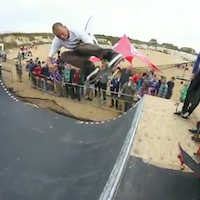 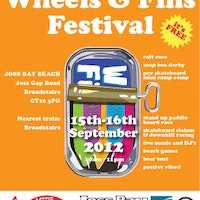 This weekend, Joss Bay in Broadstairs,Kent, plays host to the first evet Wheels and Fins Festival. The event will include a mini ramp on the beach with a “tricks for...
10 years ago | by Ryan 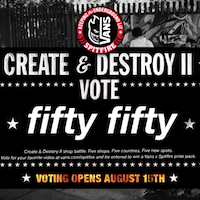 Nic Powley and Fifty Fifty on “The Skateboarding Show“.

Engage your ears and get involved in this weeks “The Skateboarding Show” broadcast, featuring an interview with Syd from Fifty Fifty telling you about Vans ongoing “Create and Destroy 2”...