The European premiere of Volcom’s full length video Holy Stokes will be taking place in London this month, with Friday the 27th seeing the video playing at Hackney Picturehouse at 6pm before partying afterwards at the MOTH club. The Russell Houghten directed video will undoubtedly including a shitload of next level skating, so this isn’t one to miss! Check the press release below and click the first flyer to be directed to the Facebook event page.

The video will also be followed by a photo exhibition shot during the making of the video by Arto Saari and Jelle Kleppens, running from Saturday 28th June for two weeks at Parlour Skatestore. The flyer for this can be seen below the first one, check the details and get involved! 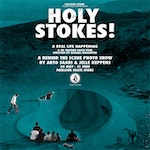 Volcom are proud to present the European premiere of “Holy Stokes!” in the presence of the Volcom Skate crew and film director Russell Houghten. Holy Stokes! Premiere showing is at 6pm on Friday 27 May, 2016 in London, England at the Hackney Picturehouse. Limited tickets are available free from Parlour Skate Store. Get in early! The post-premiere party where we will be celebrating the movie will be hosted by Free Skate Mag at the MOTH Club, Hackney from 7.30pm until late! Nearly two years in the making and featuring an international cast of skaters ranging from street legends to transition destroyers to hyper-talented up-and-comers rolling and rallying across the planet, Volcom’s forthcoming feature film Holy Stokes! is shaping up to be the feel good hit of the summer. Shot entirely in 4K ultra high-definition and directed by skate-film auteur Russell Houghten, Holy Stokes! marks the first full-length skate film from Veeco Productions since 2007’s Let’s Live. Shot in dozens of locations spanning every corner of the globe, it builds on more than 20 years and 30 influential films from the world of Volcom. “I’m really excited for people to see this film,” says Volcom’s Vice President of Skate Remy Stratton, “it’s been a long time coming. I know the team riders are excited too and right now our team is firing, so it’s cool to be able to showcase all that talent through the Volcom lens.” And with the brand’s legacy of progressive, non-traditional films, he says, “having Russell directing it is a perfect fit.” Russell’s perspective is this: “Holy Stokes is a visual documentation of raw skateboarding and the pursuit of stoke. It has been an awesome nightmare and my most ambitious project yet.”

In the mix for the whole night was Dustin Dollin; with a drink eternally clutched in one hand, a ciggie hanging from the other and...

The London premiere of Volcom’s ‘HOLY STOKES!’ went down at the weekend and was a glittering success. Luckily our very own Chris Johnson was there...