Our mates over at Speedway Mag sat down for a coffee or ten recently with Liverpool photographer Kevin Banks and stalwart of the scene John Dalton to discuss early 90’s undocumented history, riding to Munster on shopping bikes then pretending to be pro for New Deal and being present on the day that Tom Penny and Geoff Rowley first met.
If the photos below don’t whet your appetite for more, then you’re a tit.

Click any of the photos or text below to be taken to the full thing.
Bravo Speedway Mag, bravo Kevin Banks, bravo John Dalton. Thanks for sharing! Did you shoot anything of Gonz at Munster? How about other pioneering street skaters of that era?

Kev: A few pictures yeah, I got one in Skateboard! of him doing an indy that I was stoked on but I never got the bloody negative back. I’ve got one that is out of focus… It was just after Video Days [1991] had come out as well. When I was having lunch with him he was asking about people’s perception of the video and whether we liked it or not. I had to stop him and say, “It’s the best video fucking skate video there has ever been, without question.” Then he asked about the bit at the end with the car, he seemed to be really undecided about it, especially the car crash. But I was like, “It’s perfect, absolutely perfect.” He wanted to come to Liverpool, he was going to stay at my house and I was practically shaking like, “What the fuck…” (laughs). Can you imagine that? But he was a cool guy, he’s still my favourite skater.

John: It’s funny for us. When the Gonz was first pro, in sort of the mid-80s, for us lot it was, “It’s the Gonz!” And newer generations would be like that too but back then there wasn’t a lot of street skaters. You had probably Gonz, Mike Vallely, Natas Kaupas, Tommy Guerrero… Everyone was a vert skater so for us, being street skaters, your life started out as a vert skater then went on to street. But they were the gods. Those select few street skaters were who we related to more than the vert guys. You shooting him out there was mind blowing at that time. 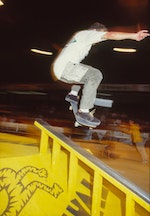 Geoff talks to Eric Hendrikx about the connections between hunting and conservation, getting American citizenship, the worst slams he's witnessed and more...

Battle of Hastings 2017 – Source Indoor Skatepark When the concrete curves of Boyley Park first replaced the rotting old wooden skatepark in Hastings, for a...

Anyone who has been to Solid Surf will know how gnarly it is to do anything in the pool or the U-pipe, and TNT's transfer...

Barney Page's full section from the 2015 Sour Skateboards video 'The Sour Solution', filmed on the streets of Barcelona and beyond...