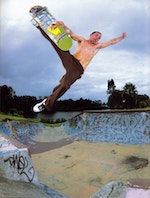 Above photo courtesy of The Chrome Ball Incident

Power stance enthusiast, pool charger, non-endorser of helmets and paid up member of the loop club – Peter Hewitt has been charging on his board for years, on his own terms, and shows little signs of letting up. The 18 member isn’t particularly one for contests, and Anti Hero edits often blend the team’s footage together, so the clips you’ll find in our Peter Hewitt Footage Feast are by no means the sum of his output; although we have included his sections in both Cash Money Vagrant and Destination Unknown, any Anti Hero video from CMV onwards contains plenty of Hewitt clips, as does much of P-Stones Beer series.

Check out the footage we have included – some well known sections, some dug out of obscurity – then get hunting for more if you can resist the skate urges bought on by watching one of the gnarliest to ever step on a board. If you get a whole episode of Grosso’s Love Letters to yourself, you’re probably doing something right…

Two of the most recognisable styles in vert skating, Hewitt and Darren Navarette, share a section in Thrasher’s relatively obscure ‘Scorchin’ Summer’ to a banging cover of Wall of Voodoo’s ‘Mexican Radio’.

A cheesy voiceover and crap 90s skatepunk soundtrack can’t distract from how gnarly the skating on display is here…Strung Out = a poor man’s Snuff.

XYZ Clothing seemed to hook up most pro skateboarders of the 90s at one time or another, offering such strange section combinations as this one – the smooth tech of Pat Channita and the flail armed gnarliness of Peter Hewitt. Not that we’re complaining, as both are fucking sick – we’ll save our moans for the truly awful music which accompanies the section…

Pedro’s first section for Anti Hero, in Cash Money Vagrant, definitely delivers the goods – if you’ve ever been to La Kantera then you’ll know how gnarly the stand up round the shallow end is at 0:54.

Kicking off with absolute backyard pool annihilation and ending with one of the best boneless ones ever committed to film, Hewitt’s section in the 88 (later to become Vox) Footwear video is still one of his best.

Simply one of the best tour videos ever, it will infect you with the travel bug like a virulent case of mind herpes. There’s Hewitt footage throughout, but we recommend you sit back and watch the whole thing.

This one bypassed me until I started working on this article, with the expected pool and park destruction alongside some of the rawest vert skating you’re likely to see.

Pedro and Navs ride again, reunited in Pacific Drive skateshop’s ‘Garage Days’ and skating to Bad Brains; what more could you want?

The backside boneless at 1:02 is a lesson in style…

Unless you’ve been living under a rock for the last year, you’ll have seen Anti Hero’s Destination Unknown – but it’s worth reminding yourself a) of what a rad team Hewitt and Gerwer are and b) how Pete seems to be still skating just as savagely, all these years and slams later…

To help pass on a few extra minutes of the almost month long wait until Vase’s unveiling, we thought we’d bring you Nick Jensen’s section...

Chewy Cannon has played a major part in UK street skating for the last ten years plus. Appearing in the early 2000s from out of...

Here's the official Sean Lomax crafted edit from the recent Wild in the Streets Manchester 2015 event brought to you by Emerica, NOTE, Dickies and...