The Nike SB European Series 2017 kicks off in Barcelona at the tail end of May, with the sessions kicking off from 18th-21st May. The teaser sees Michael Sommer, Shajen Willems, Didrik Galasso and friends Pedro Attenborough, Paola Flores and Sara and Nayat Cheikh show you exactly what’s in store and remind you of why it’s still one of the best skate destinations in the world.

Ingest the necessary details through your eyes via the flyer, press release and some snaps by Marcel Veldman from last year below – who also has an exhibition running concurrently which you can see in a separate flyer – then get involved… 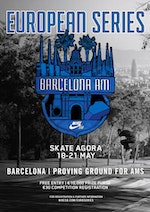 The Nike SB Barcelona AM returns to Skate Agora BDN plaza skatepark in
Barcelona for the 3rd successive year, and kicks off a summer of Nike SB European skate events for 2017. Barcelona has long been the European proving ground for skaters and this year is no exception as Nike SB invites amateurs from across the globe to compete for a total prize purse of €10,000, and the overall winner invited to take part in the Berlin Open where they will skate against some of the best Pros at Nike SB’s, The Shelter.
As per previous years, the Barcelona AM is held side by side with SLS Nike SB Pro Open that features the world’s elite street skateboarders, including Shane O’Neill, Nyjah Huston and Luan Oliveira. In total up to 61 global Pros will compete for the coveted Golden Ticket straight to the SLS Nike SB Super Crown World Championship, and for Pros currently not in SLS, the honour of securing the final two SLS Pro spots on the SLS Nike SB World Tour. The Barcelona AM and SLS Pro Open will be supported by numerous exhibitions and events held in the streets of Barcelona, celebrating the special relationship that skateboarding has with this incredible city.
Competing skaters and spectators for the Nike SB BCN AM. Registration from 9th May
.
Details and tickets for the SLS Nike SB Pro Open
18th – SLS Practice
19th – BCN AM Qualifications
20th – SLS Qualifier Heats & BCN AM Finals
21st – SLS Semifinal Heats & Final
Skate Agora BDN Barcelona
Ctra. de Mataró, 2-20
08911 Badalona, Barcelona, Spain Grey Skate Mag and Nike SB team up once more for new edit 'Again', with the Nike UK team plus guests going in on the...

A sunny weekend in Barcelona is a tough act to beat, drop in 15 top AMs, a kicking sound system and a concrete skatepark next...

The European capital of skateboarding, the proving ground for AMs, Barcelona, once again blessed us with sunshine and a perfect temp for the qualifiers of...

With the Paris Fast & High contest taking place on the 27th-28th of this month, Nike SB have backed it up with a precursor event...