Long Live Southbank presents ‘426㎡: The Southbank Show’ – a group art show with all funds raised from sales going towards renovating the currently closed portion of the Undercroft. The show opened on Wednesday night and will be running until the 29th of this month, so go check it out at Stolen Space while you can and maybe buy something safe in the knowledge that your money is going to a good cause. In the meantime, scroll down for the full press release and a few examples of the artwork on display! 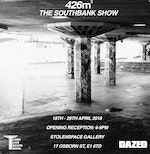 Long Live Southbank (LLSB) announce the launch of ‘426㎡: The Southbank Show’, a major group art show featuring the talent of skateboarders and creatives from around the world, aiming to raise funds to restore London’s iconic skate spot. Hosted at StolenSpace Gallery in London’s East End and running from the 18th till the 29th of April 2018, the collection of over 70 pieces of work is set to be one of the most quintessential skateboarding art shows to date.

It’s not often an art show so inextricably linked to place. 35 artists who have a connection to Southbank skate spot on London’s River Thames have contributed over 70 pieces of work to a definitive show which will display an eclectic range of mediums from the creative pool of skateboarding from across the globe.

‘426㎡’ refers to lost sections of Southbank long since hidden away from its skateboarding roots. Since approaching Southbank Centre in 2015, Long Live Southbank have created a unique opportunity to breath new life into the hallowed ground of London’s ‘skateboarding mecca’.

The show title also references the ‘high art meets popular culture’ television programme series ‘The South Bank Show’, presented by Melvyn Bragg. Although the skate space on the South Bank has been an ever present feature in the local landscape for decades, its natural creative and artistic flair has been overlooked by the shows producers.

The premise behind ‘426㎡: The Southbank Show’ is to expose this juxtaposition of the arts and display work by creatives who are directly part of the counterculture; not by those professing to do so. Long Live Southbank have fused the two middle words to create ‘The Southbank Show’ in a move to delete the imposed art divide created by the art elite and as a reference to the notion of art having to be either classical or outsider or high-end or low-end.

Over the past 6 months Long Live Southbank have curated artists from the world of skateboarding and beyond, with work on show spanning multiple mediums and formats and including many specially made pieces. From Blondey McCoy’s UV printed mirrors and Haroshi’s sculptures using recycled skateboard decks to the playful illustrations of James Jarvis and the work of street artist Shepard Fairey; the art of skateboarding is as multi-layered as skateboarding itself – ‘426㎡: The Southbank Show’ gives a chance to glimpse into this often subversive world.

Southbank has been a landmark in the skate scene since 1973 and exists as the oldest continually skated spot in the world, frequented by people locally and from across the UK and around the globe. Now working together with Southbank Centre, LLSB hope to raise £790,000 to restore the undercroft spaces and permanently reopen them in 2018 for the first time in 14 years.

With many of the artworks on show available to buy to help raise the money needed for the restoration, it is hoped a significant amount of funds will be raised from sales. Many of the contributing artists in the pan-generational line up have their roots in Southbank, having gone on to create artworks that are equally as unique as the space itself.

‘Southbank is an incredibly special place when you consider how rare it is in our modern world, especially Central London. People from every background meet there, exchange ideas, paint and of course skate. In a sense it’s a bit like The Factory, just a lot colder and instead of Edie Sedgwick we’ve got Jeremy Jones.’

Contributing artists Nick Jensen, Arran Gregory, Domas Glatkauskas, Gregory Conroy, Blondey McCoy and Jeremy Jones have a deep connection with Southbank and the undercroft community, and have established successful art careers in their own right. ‘426㎡: The Southbank Show’ will display Southbank locals work alongside some of the most legendary artists in the world of skateboarding including Ed Templeton.

There are also new artworks by legendary artists which have never been seen before including Canadian illustrator Andrew Pommier’s ‘Hard to Explain’ depicting his characteristic figures in situ at Southbank. Pioneer of modern street skateboarding, Mark Gonzales, has created some watercolours especially for the show and several other rare and limited edition works will be available.

‘426㎡: The Southbank Show’ runs for two weeks from the 18th April at StolenSpace Gallery, 17 Osborn Street, London E1 6TD. And yes, LLSB can confirm there will be skateboards.

A banging 2018 collab capsule from Krooked and adidas Skateboarding

Theobalds Cap Co and Henry Edwards-Wood come through with another rain dodging slice of London shredding in 'Hysteresis (The Idlings of March).