“Damn right I love the life I live!”

One of the greatest things about our shared culture is that the simple act of skateboarding can offer anyone, regardless of their background or skill level, opportunities to explore the wider world outside using a simple wooden toy as their vehicle.
This is exactly the case with the man in question here who forms the focus of the first of this three Part Sidewalk Raconteurs mini documentary.

Born and raised in some of the most deprived areas of Bradford, England, Doug McLaughlan stumbled across skateboarding at a very young age and fell deeply in love with it almost immediately. Skateboarding, the people it introduced him to, and the ceaseless drive to search out and skate new places have led Dougy on a journey that has taken him as far from his humble roots as it’s possible to imagine.
Doug’s voyage from young grave digger living on the Holme Wood estate in Bradford, to sponsored skater traveling the globe, forms the first of this three part mini documentary, with parts 2 and 3 detailing his life as it developed alongside his passion for skateboarding.

Anyone who has met Doug will tell you that he’s one of the most charismatic, funny and genuinely lovely human beings on the planet, so without further ado, let’s let him do the talking for once.
Ladies and gentlemen may we present – the Doug McLaughlan documentary – Sidewalk Raconteurs Part 1

Along for the ride were ultimate Bradford skateboarding OG Lee Rozee, friend and one-time sponsor Josh ‘Manhead’ Young and close friend and associate of Doug’s, Anthony ‘Avid‘ Johnstone. All three added their own insights into this overview of the Slug’s life so, big thanks go out to them.

We’d be remiss if we didn’t take this opportunity to share some choice Dougy photos from the period discussed in the first episode so knucks to Leo Sharp for letting us have some early era Dougy classics. 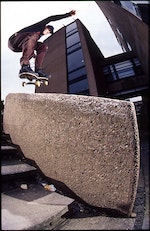 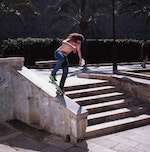 “Sit further over there so it doesn’t look so weird.”
Doug and H in Douglas, Isle of Man. Photo: Leo Sharp 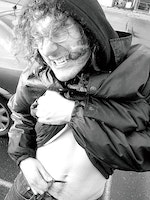 Finally, here are a couple of photos from last Friday’s Welcome Skate Store street premiere of all three parts of Raconteurs.
Big thanks to Martyn Hill, Tom Brown, all the Welcome heads, everyone who turned up and knuckles to Hop King for kindly providing tasty beverages.

One of the UK's finest: Mike Manzoori talks video making in the Internet age

Bring a spade, some brushes and low expectations and you'll be fine

"I always wondered that; why am I drawn to these ugly goblin monsters and weird shit like that?"