Mark Radden’s Essex scene video ‘Danger X Flavour’ will be officially premiering at Pioneer in St Albans on Saturday the 19th of May at 8pm, with free entry to watch the video and only a three quid charge to skate the park itself and have a chance to win some proddy in the jam which is going to follow the video showing.

Having got a copy of this already I can promise that it is a proper scene production in every sense, with a line up including Nick Remon, Harley Miller, Jordan Thackeray, Harry Wilson, Sam Hayter, Charlie Spelzini, Alex Diss, Toby Gozzett, Mark Radden and Charlie Munro as well as appearances from a vast swathe of the UK skate scene who have spent time in Essex or London in the past twelve months. Clocking in at over 40 minutes in length, this is a breath of fresh air in a skateboarding landscape which in the past few years has been slowly taken over by 60 second throwaway Instagram clips becoming the preferred medium for visual skateboarding ingestion.

Get to the premiere if you can and, if you can’t make it to the legendary St Albans park, then get hold of the DVD from Big Cartel, invite your mates round, get in a crate of booze (or preferred soft drink if you’re under 18, we’re not ones to advocate underage drinking) and get away from the world wide web for a while… 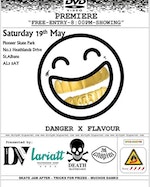 Radman is currently out of action with a spectacularly colourful/oversized ankle, but remind yourself of the dopeness he regularly puts to film via his section from Supertoxic Urethane’s ‘We’re Working On It’ and his official entry to the ranks of the Death Skateboards Am team.