Running from 12pm-7pm, events throughout the day will include a longest ollie competition, highest hippie jump, slalom race and wallride jam. Prizes come courtesy of Brixton Clothing, HUF Footwear, Levi’s Skateboarding, Slam City Skates and The No Comply Network itself, and it sounds as if there will be plenty of opportunities to blag yourself something from that list. 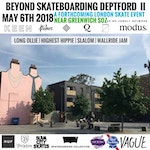 Check out our coverage from the last Beyond Skateboarding jam at Fastlands in Birmingham and the footage from the Canada Water event for an idea of what to expect on the day and click upon the words below to read an extended interview with No Comply Network mastermind Jason Caines on how the whole thing originally came about.

“Beyond Skateboarding is the events arm of No Comply Network that helps to promote the creative aspects of skateboarding, art, music and film by connecting them all together in one live experience…The main idea of Beyond Skateboarding is that everything in life is in some way ‘beyond skateboarding’. There’s too much going on. The events provide an experience for people who are into skating, creativity or a part of No Comply to drop whatever they’re doing and meet some new people, skate some rad shit, have fun sliding on a flatbar and not feel miserable on the daily grind.”

beyond skateboarding The No Comply Network

We're stoked to present the Beyond Skateboarding Deptford Jam II Highlights via the No Comply Network, covering their recent South London event.