One of the best things about skateboarding is getting about and travelling, seeing new places. It’s a necessary part of the life – new discoveries and experiences are had, and friendships are formed on these adventures, each trip with its own set of jokes and random encounters.

I’d been wanting to get a project going for a while since the camera has been coming out of the bag a bit more recently, and with winter hanging about a bit too long, the idea of a change of scenery was very tempting. It took no time to think about it and everyone was keen so the destination was set for Bilbao for a long (short) weekend.

The finalised crew was Josh Arnott, Frankie Darby, Andy Coleman and Ryan Price, with Leo on the pics and Justin ‘Syd’ Sydenham on light entertainment duties.

We all flew out of Bristol with no problems, just a bit of a delay waiting for Frankie at security as traces of explosives were found on his shoes! We asked no questions and carried on to the boarding gate…

Tidy: The first spot of the first full day was the squashed full pipe/cattle tunnel, where a traditional Spanish shepherd awaited us with his heard of goats! Not keen on having his photo taken, Leo faked a few livestock pictures and also got a beauty of shot of the shepherd chilling on the sly!

Leo: This spot is not easy to skate and is a lot tighter than it looks. Each section of concrete has two holes at the bottom of the transition just large enough for one of your wheels to fit into. Clev took inspiration from Alan Peterson’s Thrasher cover at Mount Baldy for this frontside ollie, blasting about five in a row ‘til he was happy with the board position. 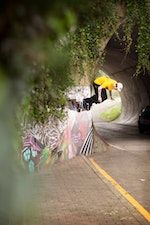 Leo: Thanks to Alain we got the coordinates of a few gems in the countryside surrounding Bilbao. This tight full pipe did not disappoint! Josh took the less travelled line and wall-rode out of the pipe and onto the pavement. 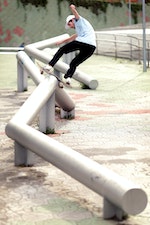 Leo: This sculpture is round the corner from the plaza with the transitioned banks, which is in turn round the corner from another flat bank with a rad metal lip. It took Strandy a little while to hook this front boardslide over the end of the bar as he kept catching his front wheels on the kink. It was one of those sessions where every go seemed like it was going to be the one; even when his board shot out and he ate shit!

Leo: These transitioned banks have become synonymous with skate trips to Bilbao over the years. The perfectly smooth tiled curves are situated within a plaza at the foot of a number of large apartment blocks. The banks range in size, but even the smaller ones are up to head high.

This particular configuration can be skated as a hip or used to get up onto the ledge. We weren’t sure if a back tail had already been done, but Josh battled with it anyway, eventually emerging victorious after more than his fair share of slams.

Tidy: We saw once we got home the same trick at the same spot done in a Dime edit, and then the cover of a Canadian mag. ABD- who cares? It wasn’t intentional and both skaters did it perfectly. 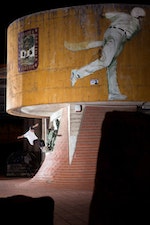 Leo: One of many spots to thank Alain Goikoetxea for – this one is in the town of Algorta, not too far from the infamous skatepark La Kantera. We were tantalised with two words that every skateboarder wants to hear in the same sentence – ‘brick’ and ‘transitions’. The spot did not disappoint! In the absence of a lip, Clev made use of the handy sculpture for his frontside pivot.

Tidy: The first day ended there and it was back to the Moana Surf Hostel for beers and chill time. This place is amazing! It has a mini ramp, small street course and wooden wave as part of the hotel, the inside decorated with amazing photographs, signed boards and trinkets left from people coming through.

Leo: After our unscheduled stop off at the local skatepark, it was collectively decided that another three hours in the van to skate Madrid was out of the question, so a street skate on unknown terrain was the only other option. A quick Google Earth study of Burgos threw up a number of interesting looking plazas. One contained what looked like curved marble ledges and after a ten minute drive, we discovered exactly that! Mr Coleman wasted no time in backlipping through the corner, much to the chagrin of Josh who kept falling into the gutter behind it.

Tidy: Saturday’s forecast was rain and that’s exactly what came down – a heavy downpour. The plan was to head to Madrid to find some sun, but we get a few hours into the journey, and thanks to Frankie’s relentless Google searching, we found a stop off half way in the small town of Burgos with a huge concrete skatepark.

Leo: This skatepark provided most of us with a couple of hours worth of fun, and presented Clev with the opportunity to stretch his transition muscles. This Andrecht in the nine-foot was pulled 1st, 2nd and 3rd try. 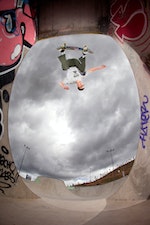 Leo: The uncharacteristic cloudy skies followed us to Burgos, but the rain held off. This channel in the bowl is actually the entrance to the skatepark. Be careful when entering there or you might walk straight into an upside down Frankie Darby. 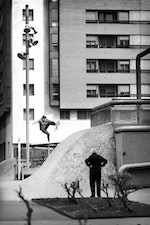 Leo: Whilst this Bilbao spot is incredible to skate, locals from the surrounding apartment blocks can get a bit irate! The guy watching Clev’s boneless was actually on our side and ended up shouting at another of his compatriots who wasn’t so enamoured with the noise.

Tidy: Sunday morning came around, which was our last day in this very picturesque part of the world. We headed over to the ‘Whale Tail’ and squeegee’d the floor dry, the sun came out and the session started. Syd got the albatross out and feeble fakied the tail, Josh started popping up to back blunt and soon after he was rolling away, deciding to lose some extra baggage by focusing his board. We finished up having a game of footy with the local kids and headed for the airport.

All in all this was an amazing few days away with no expectations or agendas, just good times as always. Now watch the edit, get stoked and book your flights to Bilbao!

Find out more about Forecast here.