15 years (to the day) have passed since the very first Meatclaw orchestrated Night of the Living Dead event exploded in your face at Rampworx skatepark, Aintree, Liverpool.
Those of you who were lucky enough to attend, (or unlucky if you were one of the people who got stretchered out or ended up biting into a real pig’s heart) will know that there has been NOTHING before or since to rival the sheer carnage of NOTLD.
Anti-Hero team riders in attendance, bands on the platform, beer cans, fireworks and utter chaos was the only rule and as such these Jams will still be talked about in another 15 years from now when most of people present at the first one are collecting their pensions.
After the first 4 NOTLD events, what started as a fusion between skateboarding and music evolved into music-only events with 6 more happenings after the initial four.
We salute Foxy and all those involved – good times, memories and scars that will never fade.
Go peep @sss_liverpool on Insta for more and keep up to date with the fiend himself.
“This is the Liverpool Deathmatch – FUCK OFF!” 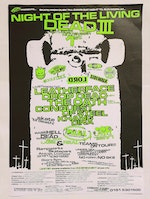