With a slightly hung-over, damp and hospitalized first day behind us, we headed up the M5 in search of dry pavements and anything other than a MOTO services all day fry up for brunch. Arriving into Birmingham around mid-day, we were greeted by Bob Sanderson and a perfectly timed rainstorm. With all chances of street skating seemingly out the window we headed off to Unit 360, the West Midland’s latest indoor facility, via Fastlands.
To our amazement the relentless drizzle had not made its way under the bridge and we were granted a thirty-minute window before a storm well and truly blew in. Fresh to the tour that day and having the energy levels of someone who hadn’t gone to NASS, Korahn showed up and reminded us all how it’s done. Straight out of the van and with zero warm up, Korahn booted this frontside half cab flip down the dingy Fastlands set. 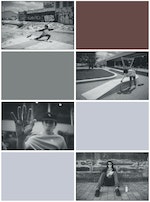 Taking a break from social media, Tinder and tales from the dance floor at NASS for five minutes, Rooney and Charlie began to session the awkward and razor sharp rail against the wall at the other end of the Fastlands Island. With this spot the stair count is totally irrelevant as the run up consists of cracked and uneven slabs which slope toward the top step, a super skinny rail that’s primed to reveal your shin bone if you fuck things up, and a line of raised bricks for you to try and ride away on. Nevertheless Charlie smith ground it and Rooney managed to tailslide it without us having to ‘BA in Cherry’ his tail to size.

As we awoke in Birmingham on our third morning, to our delight the rain had been replaced by a cloudless blue sky. We were in the van and on the M6 way ahead of schedule so we called in at Innovation, a seemingly abandoned office complex that’s on the road into Liverpool, where we sessioned the gaps made famous by Evs. With everyone using this as the perfect chance to shake off the cramp-inducing journey, a long list of what you’d expect to go down went down. With a few tricks filmed and feeling good about the spot, Jordan pressed the trademarked ‘step up button’ and began to try and bigspin flip the gap, only to be robbed when he snapped the nose off his board. Session over!
As the afternoon rolled in and replacement boards were gathered from the good folks at Lost Art, we headed up to the Everton rails. With a right angled carve needed to gain access, these deceptively awkward-to-skate rails were first put on the map by Brian Sumner (cover of the first Document Magazine) and despite being visited and skated a fair bit since they’re still virtually unrinsed for a no bust UK rail spot. Hardly surprising though given that the run sees you flying into an unpredictably busy road and thus it’s pretty obvious why this isn’t a go to spot for the youth. Rooney kicked things off with several solid front lips to get the feel for the rail whilst Jordan tested out his new board with this solid front feeble much to the delight of the swarm of Umbro clad kids that had now descended upon the run out.

Having spent most of the late afternoon wandering around the many University campuses in search of line spots, we headed back towards the van as the light began to fade. Right next to the back entrance and smoking area of the Uni gig venue lay a newly-contructed kicker to bar. Like many of the spots, the kicker is not so much a kicker, more than a slow incline which in reality hinders rather than helps you when trying to fling yourself over the always-towering bar at the end of it. Undeterred by the limited run up or Rooney trying to hit on the Bombay Bicycle club fans who were in the queue adjacent, Korahn proved once again how to be a sponsored skateboarder.

We were looking for somewhere to get breakfast and wake the legs up on our fourth morning so we headed down to New Bird where Charlie had a solo session and the rest of us filled up on a hybrid breakfast at the neighboring café. Like with most DIY spots New Bird is ten times harder to skate than it looks in photos. Charlie knows every pot hole, crack and puddle so he was able to grind the shit out of this ollie up to smith more than once as I cowered below him praying my trusty fisheye made it through to the other side.

Knowing little more than ‘he gets stuff from Shiner and Vans’ about Jordan before the trip I wasn’t really sure what kind of things he’d be up for or was capable of. Joining the tour on the second day after overdoing it a little at NASS and sleeping right through the Monday in an abandoned cap site, Jordan went on to hammer out something impressive at pretty much every spot for the remainder of the week.
By the time we’d gotten ourselves over to the Baltic block three; the blue skies that we had awoken to had now been replaced by looming rain clouds, and the reliable powerful gusts of wind that course along the Dock Road. Sharkey began to throw himself down the set whilst myself and Alan (Glass) fumbled around trying to set up our camera gear and find an angle before he rolled away from this perfect switch kickflip. The general consensus would suggest that it ain’t easy being Kaygeezeee (Korahn’s Instagram/alter ego). Personally I’d argue that from the outside it looks like a piece of piss being Kaygeezeee. He fucking rips! I’m not even sure what he did as a warm up for this super steezed switch backside flip, as from memory he didn’t skate New Bird and was filming Jordan on with his IPhone at the previous spot. From here we made the journey over to Manchester for a BBQ and session at the Pumpcage where everyone including Korahn smashed it with the locals.

Looking to avoid the City Centre and in search of something with a minimal amount of past media attention, I searched through my phone for something heavy hitting on the outskirts of Manchester. Remembering this bloody awful rail that Eddie Belvedere had taken me to a few years earlier I thought young Rooney would be keen to fling himself onto the towering lump of aluminum. When we arrived I remembered that there’s an inch wide gap in the rail just at the point that you’d wanna get on to it but despite this, Rooney made the gap out past the join and boardslid the second half of the rail.

With another BBQ and session lined up at Spit and Sawdust in Cardiff the following day, this would be our final street spot of the tour. Knowing this, Korahn didn’t fuck about. With a successful switch ollie to test the water we all assumed that the switch heel, a signature trick for Korahn, would be a walk in the park. Much like Fastlands, this spot has a downhill run up and a terribly uneven and slightly up hill landing. Throw in the unpredictable gusts of wind thundering across the bridge which forms the approach and you’ve got yourself a nightmare. Like I said before, Korahn was the pro on the tour and it was up for him to set the standards and show the youth what it’s gonna take to be at a high level for long time. The switch heel was put down after a frustrating battle but regardless, Korahn got it done and it was a solid end to the week. 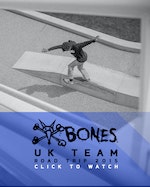