Even those who avoid transitions like the plague can’t deny the enjoyment in seeing pictures and footage of what preceded the rise of street skating. A rise in skate-nostalgia means you are as likely to see the kids at your local park planting their foot as switch flipping the bank to flat, and shiny new concrete bowls and pools are cropping up left, right and centre.

While these new facilities are brilliant, as well as a shot in the arm for the already high level of UK skateboarding, there is an undeniable lure to the sandpaper curves of parks built in the 70s and 80s.With our Concrete Carcasses series a slowly ongoing but time consuming process, we thought we’d give you a fix of ‘back in the day’ gnar with ‘crete Tinted Glasses – the best UK parks of yesteryear. Click through for parks both long-departed and still hanging on…

The OG of OG parks, Romford has been in operation since 1978 and, with its recent Heritage status listing, shows no signs of slowing down. A bucket list skatepark if ever there was one…

In a way Romford’s poor cousin, Harrow was built by the same company but a combination of lesser build quality and a lack of the maintenance received by Rom makes it more of an acquired taste. That said, it has fostered the local skate scene (which has always produced incredible skaters) for years, and undoubtedly has its charms! 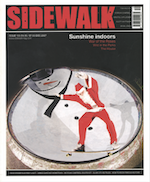 Scotland’s one remaining 70s park has led to some of the gnarliest skateboarders to come out of these isles in recent years, with the yearly ‘Fun Day’ at one point a focal point for the whole country and half of the north of England. Recent additions are at the very least controversial, but the original shapes still survive weathered but intact and we highly recommend you pay a visit. 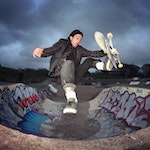 While the first three parks are white knuckle rides, with large transitions and plenty of slam potential, Slade’s Farm is a mellower session altogether. A selection of small banks of differing gradients and a kinked, whippy bowl corner of around 5ft offer more possibilities than you would think at first glance…

The best vibes of any skatepark in London bar none, if you haven’t been to Brixton Beach and sampled its concrete delights then you’re missing out!

A sadly now demolished and filled in gem…

Another loss to the disappearance of skateboarding from the public eye, this one demolished in the mid 90s.

Still there for the shredding, as can be seen in this piece of Alex Hallford magic at the beginning of his Muckefuck section…

The only indoor park in this list, Rolling Thunder was built in Brentford in 1978 and has pretty much yet to be bested in indoor London skatepark layouts by the looks of things…

A still looked after jewel in the South Coast, Southsea (near Portsmouth) has weathered many a skateboarding fashion shift despite their helmet rule…

For more than 3 decades the now huge lump of concrete that is Livingston Skate Park has been hosting a yearly gathering to celebrate all...

Colin Kennedy is one of skateboarding's stalwarts and the next few pages' worth of Footage Feast should give you some solid shred inspiration for the...

Even those who avoid transitions like the plague can’t deny the enjoyment in seeing pictures and footage of what preceded the rise of street...

Charlie Davis and SkatePAL: Skateboarding Parks and Coaching in Palestine

Even those who avoid transitions like the plague can’t deny the enjoyment in seeing pictures and footage of what preceded the rise of street...

Charlie Davis and SkatePAL: Skateboarding Parks and Coaching in Palestine