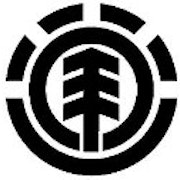 Element’s Make It Count is a global series of amateur skateboarding events designed to seek out new talent. In keeping with the brand’s message of social awareness, environmental stewardship and positivity, the entry fee is one item of canned food per entrant which is donated to a local food bank, and there is no cash prize for the winner.

Stene joined 17 other skaters from the USA, Brazil, the Netherlands, Canada and Japan at the global final later in the year, held at Element’s skatecamp at Sequoia Lake in California. The standard of skating was incredibly high, with reigning champ Jon Cosentino of Toronto, Canada eventually defending his title and extending his sponsorship from Element. The event featured guest appearances from Element pros Nick Garcia, Madars Apse, Mark Appleyard and Evan Smith.

2014’s global series kicked off in the Hollenbeck Skate Plaza in the Boyle Heights area of Los Angeles with guest judges Appleyard and Nyjah Huston. The series will then travel around the US, visiting cities such as Atlanta, Nashville, New York and Milwaukee, before finishing back in LA at the Berrics in August.

View More Element Make It Count
5 years ago | by Ryan 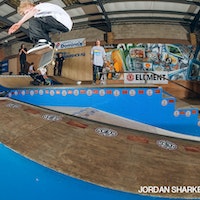 The Element 'Make it Count' UK 2016 contest took place at ATB Skate Warehouse in Swindon on Saturday, with known and unknown heads making their way to the town in...
5 years ago | by Sidewalk 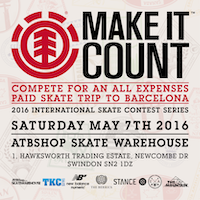 Element - Make it Count - May 7th at ATB Skate Warehouse, Swindon
6 years ago | by Ryan 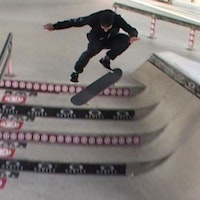 On Saturday afternoon, Projekts Skatepark in Manchester played home to the UK leg of Element’s 2015 ‘Make It Count’ content series. As usual, the event went off with Jiri Bulin...
8 years ago | by Ryan Saturday saw Ross McGouran and the Element Skateboards crew roll into Nottingham for the UK leg of their 2013 Make It Count contest series. A hectic day of jams at...
8 years ago | by Ryan 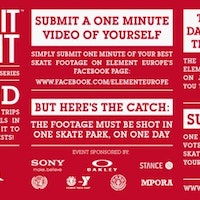 Can’t make it to Element’s 2013 ‘Make it Count’ comp at Flo Skatepark, Nottingham, next month? Well never fear as Element and Dakine are holding a special ‘Wildcard’ video contest...
8 years ago | by Ryan 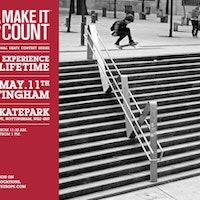 Element 'Make It Count' in Nottingham - May 11th.

Element are bringing their Make It Count contest back to the UK next month, with a full day of comps at Nottingham’s Flo Skatepark. Check the flyers below for all the...
8 years ago | by Ryan For this years Make It Count contest series, Element teamed up with Sony Xperia to provide one lucky human from the European finals in Berlin with a Wildcard opportunity to...
8 years ago | by Ryan 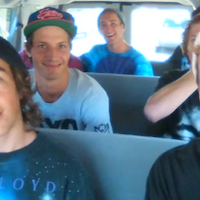 So last week we brought you the clip that showed various Element Skateboards representatives traveling to Germany and handpicking Rasmus Saclin to represent Sony Xperia’s “Wildcard” entrant into the worldwide...
9 years ago | by Ryan

http://mpora.com/videos/Ooq6q5K6T Last weekend saw Element’s “Make It Count” competition series return to the UK for it’s 2012 event, this time around landing at BaySixty6 in London. Check the clip from...
9 years ago | by Ryan Element Skateboards are bringing their “Make It Count” contest series back to the UK again in May, for another day long competition that’s open for literally everybody...