In 2011, it was announced that Texan transition king Ben Raybourn had left Kristian Svitak’s underground 1031 Skateboards to join $lave, and he was welcomed with a great clip. However, Raybourn unexpectedly jumped ship the following year, leaving $lave to join the team at Tony Hawk’s Birdhouse Skateboards.

$lave was founded in June 2007 by creative director Ben Horton, and has its headquarters in Carlsbad, California. Among its products are the Pet Peeve, Better Living Through Bioengineering, Automatons and The End of the World series of decks, featuring signature models from Allie, Mumford, Goemann and Schultz. There is also $lave-branded hardware and wheels, and apparel such as T-shirts, hoodies, flannel shirts, caps and beanies.

Its only full-length video to date has been the 2009 release Radio Television, starring the entire $lave team, which was accompanied by a series of bonus outtakes, released on the TransWorld SKATEboarding website. There have also been numerous clips, including a series from the company’s ‘In the Northwest’ tour, and Rat Racing with Pat Burke, to coincide with the release of the Rat Race series of boards (‘You think this is funny? You’re fired!’). 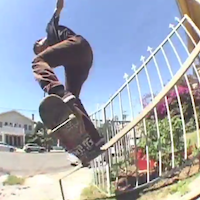 AJ Zavala’s new part for $lave offers up a fat slice of full throttle rail chomping madness, have a watch then pick up a copy of the new mag for...