We started off the tour with a skate at the House of Vans London for the ‘30th Anniversary of the Screaming Hand’ exhibition launch.

The Waterloo arches were full of Jim Phillips fans and after viewing the amazing art show they all quite clearly wanted a moving art performance, so Munson, Colin and Carl all got stuck into the bowl whilst Dan and I kept it street based.

Dan really is something else – someone should probably remind him that skateboarding is meant to be hard. He set out to destroy the hubba ledge with a barrage of ‘first go Joe’ grinds that prove that Dan is, as he always has been, one of the best to tread the grip.

After sufficient sweat was lost, it was time for a swift half or 16 before being asked to evict a homosexual from a room in a hotel we weren’t staying in and being subsequently followed home. I’ll leave that there…

The next morning we hit up the Brighton DIY spot after swiftly giving away a Screaming Hand deck at The Level Shop to a lucky local.

We were stoked to see that Stevie Thompson had bailed the place out of two feet of water and was well into a session of classic Stevie wonderment, Pastey was telling us stories of how it all came to be and took us on a guided tour of his security office/shanty shed and supply chain.

This spot is RAD; the guys down there have put a lot of effort into it with quirky transitions of all different sizes everywhere, and Beach Pebble coping in areas that make for an interesting grind. Plus it’s just along from the nudist beach…there are both good and bad points to this though.

Colin, Carl and Kieran got stuck straight in and flew around like they’d been there for hours!

We then out-ran the impending black clouds to Peacehaven’s new park.

Naturally Kieran and Colin got stuck into the hardest transitions to skate with countless NBD’s spilling out of both of them.

The next morning it was off to Duck Lane in Bournemouth for more coping chaos!

Mark Munson is an absolutely brilliant motivationally abusive bastard to have sitting in the van, visiting the local shop, or sitting in a hotel lobby – he will attack your face muscles at any chance with a barrage of cheeky Essex charm!

Throughout the trip the ‘Munsonisms’ kept us trucking and in very high sprits indeed, turning the simplest of observations into a hilarious situation that either makes you want the ground to open up and swallow you, or make you cry with laughter.

We knew that we needed to get to the Dean Lane Fun Day later so we all got stuck in and got the Duck Lane job done.

“GET IN THE BOWL YOU MUGS!”

After everyone got their fill of ice cream, sunburn and concrete good old Dan Wileman wanted some more.

Being known as a more street based skater, Dan likes to keep everyone on their toes with some of the hardest transition terrorism.

Following that madness, it was back on the fun bus for us and onto the Dean Lane Fun Day!

The DLH Fun Day is known for its chaos, metal bands, booze and, of course, skateboarding, so we knew we were in for a treat.

We got there as the proceedings were in full swing, so the session was going off already with the bands playing full throttle. All the major heads were in attendance and the main focus was on the round tombstone at the bottom of the park, so we got stuck in with Dean ‘The Machine’ Greensmith and Ryan ‘Clev’ Price who were both smashing it, and chewed the cud with some amazing humans until the West Country sun went down! 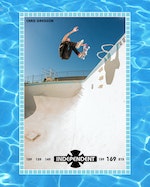 The following day it was off to Oxford Wheels Project for some boards and BBQ.

Rolling into the park it was great to see Sean Goff, Greg Nowik and Don Brider on the platform – skateboard royalty of the highest order!

Sean still kills it along with Greg so the bowl session was in full flow, so that was the obvious place to start.

Carl flew around the corners into a frontside 360 over the spine and Kieran floated some rad backside ollies like only he can. Munson was warming up with a backside nosegrind and ran out a bit awkwardly, twanging his calf muscle in the process, so he was out of the picture, which in turn, became our problem with the abuse stepping up another gear.

The guys moved onto the back quarter/love seat set-up whilst I threw myself out of the bowl into the street course. Carl busted out a load of tricks over the love seat with the stale-tailslide standing out, Colin pushed an indy nosegrind over with ease and Kieran was smashing his back truck with ollie up to smiths and more pisstake backside ollies.

The next day it was a mission to the hallowed ground of Harrow to get some ‘70s ‘crete under the feet.

After an aggregate warm up, Colin got things going. At this point I want to mention again that Colin Adam is a force to be reckoned with; he has the ability to gain speed on anything no matter what the surface, can skate everything and never holds back. It’s so good to witness.

He got straight into the halfpipe with some amazing sounding frontside grinds, a backside boneless and an eggplant…a fucking egg in Harrow halfpipe! Nutter.

This unfortunately claimed Colin’s ankle, but what a way to go!

We decided to stay on trend and head to our second ‘70s ‘crete park of the day…STEVENAGE!

This place has seen some things in its time and in its day had the likes of Dave Allen gracing it on the regs!

Kieran Menzies is a quiet dude who definitely lets his skating do the talking.

Straight from the van he can turn it on and boost around even the trickiest transitions with ease. He seemed very at home on this harsh surface and jumped straight in at the deep end.

This is truly gnarly. Kieran finds himself at a height that not many people have visited in the town of Stevenage - frontside air

Following Kieran’s lead, I followed suit and hit the crusted round lip.

There’s a petition online to save this skateboarding relic,  give it your signature!

After a well earned night of sleep we headed to the now very well known Tottenham DIY spot where we had heard of some new DIY additions to the place, and, never one to disappoint, upon our arrival we were greeted by what can only be described as a giant vagina hidden behind the original concrete creation.

This thing is incredible! I won’t go into specific details here but I’d say it is a very accurate recreation of female genitalia.

I spoke to one of the guys that helped build this thing and they had a load of issues getting it done but they got there in the end – thanks so much for the hard work to all involved!

Like he would, Carl got up close and personal with a frontside crailslide to mark the end of the tour and to put a full stop on an amazing week on the road!

Thanks very much to everyone in the van, Shiner Ltd, Santa Cruz and Creature Skateboards, Alan Glass for chauffeuring us around the country and filming, and Reece for capturing our souls!