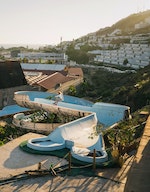 A tip off from one of Josh’s hook-ups in Manchester led us to this absolute gem of a spot. There’s not a lot to be said here aside from the fact that abandoned waterparks are rare as rocking horse shit, and the tree growing straight through the middle of the structure had overgrown, effectively cutting the path off halfway down, meaning that Benson was the only person physically able to cruise the whole thing, start to finish: although I think Remon might have done it as well, towards the end of the session – he’ll usually find away defy physics and/or nature.

Whether it was the painkillers he was on, the Trops, the inspiration The Zimbarbs were providing or a combination of all three, Doug battled his way through this frontside grind for a good hour before eventually surfing his way out of the thing, hurtling at full speed towards the inevitable foliage finish line. 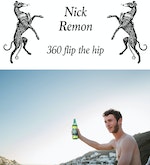 Remchops has spent the second half of 2015 on the Chelmsfordian injury bench having blown his knee out warming up for the London Am contest back in June, and only found his way back onto his board again a few weeks prior to embarking on this particular trip. Not that you’d have ever guessed, obviously.

Point in case – the state of this very photo.

This is one of those ‘classic’ (or ‘rinsed’, if you prefer) spots that everyone wants to go to, then when you arrive and realise there’s not a lot left to really do, most people sit down, or wander off to the shop, come back with beers and then sit down.

I don’t honestly think the spot particularly excited Nick, but if you leave him in one place for too long in the presence of a skateboard, he’ll always find something to do to kill time. 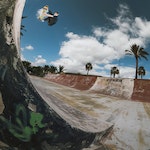 Apparently we went to this skatepark on my last visit to Gran Canaria, during the January of 2011 with the majority of the UK Dwindle team at the time. Will Harmon informed me that we apparently drove to the park one day, unanimously laughed at the state of the place, then got back in the fleet of cars and went and skated somewhere else.

Fast forward the best part of five years and I was back, only this time with the intention of skating the thing…

The layout is unorthodox at best – one long quarter runs across the length of the park with two massive, mellow, coping-free semi-bowled mounds feeding into it at either end: this quarter is plonked in the middle, and little micro-spines are hidden away in either end.

It’s one of those parks where it’s not uncommon to find that the locals have constructed various kickers and curb-high manny pads out of collected driftwood, which they much prefer to their rugged concrete surroundings.

Anyway, whilst the others were busy trying to get their heads around the Elvis-like flatbanks/quarters/mounds, Benson made short work of this mid-session alley-oop melon.

Team manager, van driver, per-diem dispenser, receipt collector, group chef, resident heartthrob…there are many strings to Josh’s proverbial Route One bow, and during this week in Gran Canaria he laid out the finest claim yet for the 2015 ‘UK team manager of the year’ award.

This was the final trick of a day where Josh also MVP’d the skateboarding category as well, giving Remon a well deserved day off and returning back to the villa with three photos safely in bag, just in time to cook up dinner for the whole crew. Stoked…

Seriously though, big up yourself Scranhead, you smashed it mate.

As is always the way with Remchops, this ‘just happened’.

Having shot the quick-foot ollie up ollie over for Instagram whilst killing time by the seafront, he then proceeded to kickflip the same gap in only a handful of tries, much to the astonishment of both myself and CJ, who then requested he do the same thing three more times on order for us to shoot and film it in various ways.

Nick obliged, and the fruits are here for you to marvel at.

Unfathomable business: the kind that only Nick can be bothered to produce. 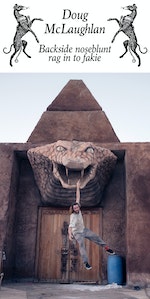 In the time between the flights getting booked and arriving at Heathrow Airport, Bradfordian motor for existence Douglas McLaughlan somehow seriously battered his knee, to the point where simply walking was a task enough, let alone navigating a skateboard. So, aside from a few choice battles such as this Bronson 56K-esque backside noseblunt grab in to fakie, Doug willingly occupied the full time position of ‘hype bringer’. You might also be wondering what those brightly coloured, comfortable looking trousers are that Doug is proudly sporting throughout the article. Well, lets hand you over to Doug so he can introduce to you to ‘The Zimbarbs’ in his own words…

“The Zimbarbs are trying to bring a bit of peace back into the world; you know what I’m saying? You can see the chem-trails coming off them; you can probably see that in the picture, man. Them shits kept me right, kept me just warm enough, just cool enough.

I found them deep in…you know on Indiana Jones, when he’s in that factory with the boxes at the end, all stashed away? It was down there. It said ‘do not open’ on the box, ‘the Zimbabwean Peace Trust – 1843’. So I broke into that box anyway with a crowbar and there they were. I thought, “here we go, this is a match made in heaven”. I thought, “these look like the ones, man” with the flowery pattern on them, all lightweight.

It’s the Felix style, isn’t it? When I seen them, Manhead was showing us around the Route One vault, I found some new trackies and stuff, and then I clocked them bad boys out of the side of my eyes, I thought it was some sort of shirt or something…”man, I’m having a pair of these badboys, me”. I’m just trying to bring a bit of peace back. The Scottish bobsleigh team are killing it.” Every trip to a foreign climate sees the entire crew venturing out into unfamiliar alcoholic territory and quickly settling into a new beer of choice, and the choice of cerveza for this particular trip was a locally brewed number named ‘Tropical’.

Despite being able to buy Tropical in any number of UK based supermarket chains, the 4.7% ‘Trops’ as it became known were a €1 novelty to Doug and Remon, who quietly put away on average eight large bottles each per day.

All the fallen glass soldiers were collected up at the end of each day and placed in the pantry in the villa for recycling, and by the time we were heading back to the airport for our flight back to the freezing cold clutches of Heathrow, there must have been upwards of 100 bright green bottles left adorning the pantry shelves.

As Doug himself put it last night, him and Remon went ‘Trop for Trop’ the entire week. No mean feat considering that Doug has a solid decade advantage on Nick in the boozing realm, but something that Nick handled with a surprising/worrying amount of ease. Dogshit, dust and unimpressed residents – the trio of joys that have awaited CJ on each occasion he’s visited this spot. It is one of those aforementioned ‘classic’ Gran Canaria spots to be fair, and seeing as how it was all four of the present teamrider’s maiden visit to the place, it only seemed right to go make the inevitable blue-tiled introduction.

An hour or so later and Josh had this 180 fakie 5-0 in the bag, CJ had encountered his traditional angry local after setting up his flash stand too close to a nearby car, and Doug took care of clearing the run up of dog soldiers and dust.

A successful and traditional afternoon, I’m sure you’ll agree. “Hey Nick, you could probably back smith that…”

It’s funny that no matter where in the world you end up, skateboarders from our island will habitually find themselves sessioning a carpark.

Three pins, two hours, eight phone calls and a frustrated van of skateboarders…the mission that we had to endure in order to find this spot was certainly up there as far as ordeals go, but Josh’s perseverance was worth it in the end, as you can probably tell as you enviously stare at Nick floating above this idyllic backside flip.

It’s rare you come across genuinely new spots to skate in places like Gran Canaria, but this here is a startling example of one such find.

Tucked away between labyrinths of holiday homes in the middle of the great god-knows-where, these winding brick waves were greeted by a combination of sheer relief and car-legs, though Nick and Josh gradually dragged themselves out of the mental haze of being on the road for a few solid hours and made the most of hour-long session at the spot.

For Doug and Benson, the Tropicals were steadily flowing, tired/inured legs were being rested and a local troupe of mid-20s female aerobic enthusiasts dropped by and provided some late afternoon inspiration for their foggy grey matter.

There are worse ways to pass on a Wednesday afternoon, that’s for sure. 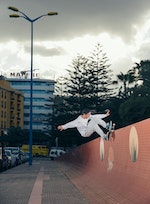 You might be surprised to learn that Benson hasn’t left Scotland all year. In fact, the last time I think he might have done so was on his final rain soaked adidas ‘Touring’ filming trip to Cardiff, which went down in the gloriously miserable month of October 2014. Since then he’s been working as a delivery driver for Yodel (‘the worst delivery company in history’ according to my quick Google search), running parcels all over his beloved Livingston for eight hours a day.

Seizing his chance to leave his mark on what Doug accurately described as the ‘Galaxy Chocolate Bar Banks’, Benson ragged his hurricane back down the rickety transition in an awkwardly backwards manner. Good lad.

When wind and rain have scuppered your final day’s plans and dying daylight is threatening to ruin it even further, a twenty minute window of dryness and a semi-sheltered block three are about as much encouragement as Nick Remon needs to drop the Trop and up the ante.