In typical budget airline fashion, the outbound flight from East Midlands to Mallorca was delayed three times by an hour apiece. This was due to the following scenarios unfolding:

1 – Whilst taxiing to the runway, a woman two rows back from me took some sort of asthma attack/anxiety attack hybrid and needed the paramedics to be called on-board in order to stabilise her breathing. Back we went to the terminal building.

2 – Two lads who were part of an overexcited stag do whipped out a bottle of vodka they’d acquired from duty free and started necking it as we were still sat on the runway, then threatened to “slap the shit out of…” the flight attendants (both male and female) for informing them they were breaking customs laws and they needed to hand over the booze and simmer down before they’d be taken off the flight. They didn’t stop, the police were called and they were thrown in the cells. That was another hour we had to wait.

3 – Once the runway staff had finished refuelling the plane following the stag do bellends/police incident, they forgot to remove the chocks from underneath the plane wheels. That was yet another hour delay.

The day after this, what seemed at the time never ending nonsense, took place, Nick kicked the trip off in classic form and handled this backside noseblunt on a waterside Mallorca staple.

Leeds local Dale Starkie did his ankle a serious mischief at Hyde Park two days before the trip began, and as a result spent most of the time swimming at the pool in the house we rented, or eating toast as if the Brexit vote meant bread was going to be outlawed the second we landed back in the UK. He did strap his swollen and bruised foot up for long enough to stick this bluntslide to flat though, before resuming urgent bread munching duties.

Dale was relatively quiet throughout the course of the week, though on the final night’s visit to a ‘not quite yet in season’ Magaluf, the wheels came off in a spectacular booze fuelled fashion. One fishbowl too many resulted in young Dale insisting he was staying in Magaluf to get wedged in with the locals, before being strapped into his seat in the van against his will and proceeding to empty his internal toast stash into a carrier bag for the duration of the hour drive back to our villa. Poor lad. Eight slices of toast at 3am soon saw him right again though, and he was up and about in the morning completely unfazed, hangover free and ready for the hellish journey back to Brexit-land. More on that one later… 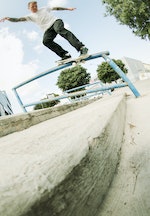 John is a stand up bloke who hails from Essex, skates a little like AVE and has an obsession with red meat that was so intense we thought it was only right to nickname him ‘Meat Man’. Honestly, you’d nip into the supermarket to get a quick sandwich or some crisps and a drink or whatever, and John would be straight down the meat isle eyeing up sirloin steaks and mince. He’d be cooking up meat for breakfast, oversized burgers on an evening, whatever street meat he could get his hands on in the day…I guess to skate with the power of something that destroys livestock on a daily basis you need have a similar diet. Here Meat Man can be seen elevating himself into back smith on a tall blue number located in a the middle of a ghost town like industrial estate. What a beast!

This plaza spot used to be right next to a police station so back in the era of Blueprint domination the whole area was a complete bust. Luckily, in the Mallorca of 2016, the police station has been moved a few miles down the road and we managed to squeeze in a solid session at this spot, leaving of our own accord for the first time ever with a steady amount of clips and photos safely in the bag.

Here Sam balances a line starting fakie 5-0, paying no mind to the shoot for Golden Years Gap he is rudely interrupting in the process.

You know full well that if Kris is on a trip, he’s going to more than handle his business, and this Mallorca excursion was no different. Despite landing in from NASS Festival with Meat Man a day later than the rest of the crew, and looking fairly deprived of sleep as a result, from the get go Kris stepped to the plate and racked up those minutes on the timeline.

Due to the aforementioned police station issues attached to this spot, this channel gap hasn’t really had the seeing to that you’d expect. Following in the footsteps of Scott Palmer a decade or so previous, Kris completes the bank-to-bank journey, taking a flawless blindside flip with him for good measure.

Once again spying the route less travelled and not thinking twice about taking it, Kris took his sturdy old nosegrind for a quick journey from a thin rugged wall, over a corner to a (presumably) previously unskated metal ledge, popping out early like Boris Johnson. Job’s a good one.

“I’m gunna do it next go if I can just get enough lift out of that thing to get me onto that…thing.”

For the record Nick, that’s a ‘bump’ and a ‘bar’, but I suppose it doesn’t really matter what you refer to them as so long as you can utilise them to perform higher than average crooked grinds and produce shapes like this whilst you’re at it. Bravo. One of the many (Br)exits you can take at Sinatra, and not one that’s usually rolled down on a skateboard. Whilst Nick went to war with the transitions around the back that are usually the main draw of this spot, Kris ventured a tad off piste and emerged with this nollie flip into crust to show for it.

Unfortunately, I had Meat Man doing this gap tailslide twice. My card wasn’t ready to record again after filming Kris’s attempt the same line but doing gap lipslide a few seconds before, and as Meat Man was pushing through the run up, I knew the card wasn’t going to play ball. The next thing I know, he’s sailing towards the harbour all victorious-like, and I was sat there with little more than a roll out to show for it. Cheers for battling through this one again Meat Man, I still owe you a burger or two for it.

This was the one spot where the police caught up with us. To be fair, apartments surrounded it and we were trying to skate it during siesta on the first day where we had a full crew; we should have been expecting some intervention from the nearby authorities. Anyway, minutes before the local po-po appeared to move us along, Meat Man was riding away from this solid as you like smith grind, avoiding a pram pushing local mother as he went.

The crew are round the corner waiting at the van, the police are expected to be on their way back round after booting us out during Meat Man’s previous smith onslaught, camera bags are on our backs and Kris wastes no time hammering home this ‘final, final try’ switch backside tailslide followed by the typical ‘swift exit from the area before the police reappear’. 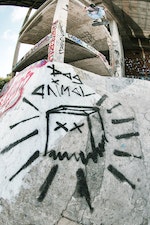 ‘Sinatra’, as this place is known within skateboarding circles, is one of the better-known spots on in the island. Everyone has had coverage at this long derelict nightclub, from Ben Grove, Vaughan Baker and Doug McLaughlan, to the likes of Rick Howard and, most recently, Daan Van Der Linden, who scored the cover of Free stalling the mid stairway landing having come out of the transition. It goes without saying that stalling that thing is fucked.

‘Fucked’ is also how I thought we would be describing Kris’ knees by the time he was rolling away from this kickflip off the towering stairway landing and into the transition, but lo and behold he handled it without so much as breaking a sweat.

The last morning was a nightmare. We had to do two drops at the airport for people to catch flights, with a trip to the van hire place sandwiched in between in order to return the wagon. What should have been a fairly straight forward mission descended into chaos as none of the addresses we had for the hire depot appeared to exist on our maps, and with time ticking until our flights were due to depart, tempers started to flair. The last thing we needed to happen was have an armed police officer stop us on the motorway for no apparent reason then pull his gun on us for simply asking if he knew where the hire place was. But happen it did. By some stroke of sheer luck we talked down the copper, found the hire place and made it to the airport just in time to join the Saturday morning chaos, which reached boiling point when the check in desk attendant deciding to close up shop after we’d stood in line for 35 minutes in order to drop our bags. Some heavy-handed tactics from Horse meant our bags got dropped, and the flights were all somehow boarded with mere seconds to spare.

It was back to Brexitland with us, to join in with the post referendum fun.

Anyway, a few days before this malarkey took place, Sam pulled off this heelflip body-varial from high to low on one of the islands most sought-after bank configurations. With ease as well, might I add…