Truro Plaza – I’m still really stoked on this place, and knowing myself, Leo and Stu had a helping hand in the design makes it extra special for me. There are a few things that I wish we could have changed or adjusted slightly but it’s still rad, the kids seem to enjoy it and does attract a lot skaters from all over the country.

Pizza Express – I’ve been eating here for years, the people that know me know that I love Pizza Express, especially the exquisite Pollo Ad Astra on a thin and crispy Romana base. If I’m feeling a bit flush I’ll accompany my delicious main with a large pint of Peroni. BOOM! This is definitely my go to restaurant in Truro when I’m treating the missus; she has no idea how lucky she is (laughs)!

Newham Banks – I have a love/hate relationship with this bloody spot, the building is owned by a cleaning company and for whatever reason the planters outside have been filled in with concrete creating two banks that you can do tricks into. It’s one of those places that looks way better on camera than it does in real life. The run up is rough and virtually non-existent, and if you don’t judge the bank you’ll more than likely eat shit.

Penair School – This is the secondary school where myself, Leo and Stu all went; it was built sometime in the late 70’s I believe. Some parts of the school have been updated but one area outside my old form room still looks dated and has this long steep bank made of concrete slabs that has a thigh high bar running across the top. I have no idea why it’s there but it makes quite a good/sketchy spot, the run up is also slightly downhill so the potential for slamming is quite high. It’s still crying out for a flip trick to be done over it.

How do you your roots go into Cornish history Jody? Am I right in thinking you were actually born in Milton Keynes then relocated to Truro as a child? Where did the decision to move to Cornwall actually come from?

I was actually living in Haddenham, Cambridgeshire, at the time my mum decided to up sticks and head for the sunny shores of Cornwall. The majority of my mum’s family lived down in Cornwall and she always wanted to return to where she grew up. It just so happened that a job and house opportunity came up, and with me and Leo ready to go up to secondary school, it made perfect sense.

Which particular part of Cornwall would you says is your ‘home’ then? And how many different parts of Cornwall have you lived in over the years?

To be honest I haven’t actually lived in that many areas outside of Truro so it’ll always be classed as ‘home’ to me. I did move to a little picturesque village shortly after moving down to Cornwall situated on the north coast called St. Agnes. I spent most of my early teens here trying to surf, and skating Mount Hawke every chance I got. The park was only a three-mile bike ride away so me and Leo were always there.

You’ve actually lived all over the UK for varying amounts of time haven’t you? Where else have you lived, how long for, and what was the best thing you found about living in each of those different towns/cities?

Yeah I’ve moved around a little bit, Cornwall is an amazing place to live but I think to really appreciate it you need to leave once in a while. I did spend a year up in Surbiton (south-west London) when I was in my early twenties, it was only for year but I really enjoyed it.

So what’s the nearest spot to your present abode, and what’s the best trick you’ve seen go down there?

Well I recently bought a house with my girlfriend in Wadebridge and to be honest I haven’t had a chance to properly explore the area for spots, however Bodmin is the next town over from me and that’s where I witnessed Pablo do that crazy long feeble grind which made it as a Sidewalk cover. That definitely has to be the best trick done in my area. 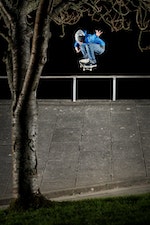 Switch ollie to escape the Joan the Wad (google it)

Out of all the spots dotted around Cornwall, which one spot do you think you’ve spent the most time at over the years, and why?

It has to be wooden ledges at Tremough in Penryn; we absolutely rinsed this spot back when we were filming for the first and second SJz videos – ‘Rough Ground’ and ‘Seen’. It was arguably the best ledge spot in Cornwall, even though the ledges were wooden they were solid, you could grind and slide them easily. Before we only skated ledges at Mount Hawke so to have a ledge street spot, which at the time wasn’t at all a bust, we were in heaven.

If you had to choose, what would you say is the single best trick to ever go down within the confines of Cornwall?

I’m not sure there’s one single best trick as I’ve done so many (laughs)! Just kidding. I think Harry Bray’s kickflip in the full pipe at Truro College is insane and rightly so he got a cover from it, also Pablo’s feeble is definitely up there.

How about Truro in particular – what one trick stands out there?

Apart from Harry’s kickflip, I would say Stu’s ollie out of the wheelchair ramp at Penair School; to this day I still don’t know how he managed to do it. Unfortunately they pulled down the building shortly after he did so he never got the photo; the footage is still bonkers though.

Who are your favourite Cornish ‘celebrities’ then? Either local legends or certified famous folk…

There’s only one ‘local legend’ in Truro and he goes by the name of Leo Smith! (Laughs) He basically got nominated for a local popularity contest that he ended up winning resulting in him being put on several billboards dotted around the town.

The actor who plays Phil Mitchell pops into work from time to time; he has a house down this way and loves shopping for camping equipment. Not exactly living up to the hard man character!

What’s the most memorable Cornish related news headline or story that you’ve seen over the years?

The West Briton is our local newspaper down here and they’ve printed some classic news headlines over the years. I quite liked the story about a ghost ship full of diseased cannibal rats that could crash into the coast of Devon or Cornwall.

The Telegraph actually ran a story last year about a seagull that pecked to death a Yorkshire terrier! I did once witness an old man drive off the edge of the quay where I work in his electric wheelchair, that one obviously made it to the front page of the newspaper. The old boy survived, by the way.

What five things can you find in Cornwall that you can’t get anywhere else in the UK?

1. Obviously a proper Cornish pasty, none of this Ginsters bollocks!

3. Flambards ‘Best Day of the Week’ – This theme park is our version of Alton Towers but way shitter!

4. The Eden Project – A huge greenhouse complex that basically looks like giant pod made from bubble wrap.

If you had to sell Truro to an outsider by the way of a brief tour of the town, where would you take them, what would you see, and why?

I would have to first take them to Rowes and get them a large steak pasty in their hands, but if there’s a long queue, god forbid, I’d take them round the corner to see Gina and the girls at Warren’s Pasty Shop. Both are solid pasty establishments. Then maybe pop into Vans so they could get a quick selfie with ‘local Legend’ Leo Smith, and then go sink a few Rattlers in the infamous Bunters Bar.

Using all of your experience as a Truro local, what friendly words of warning would you give to an outsider visiting the town?

If you’re planning on eating one of our mouth-watering pasties out in the open, be sure to hold the thing close to your body between bites as the sky rats will not hesitate to swoop down and rob you of your Cornish treat.

So you’re obviously a very well travelled individual Jody – on your missions around the globe, have you ever found anywhere else that has a similar feel to Truro/Cornwall?

Encinitas in Southern California has a similar feel about it; the beach city definitely has that laid back Cornish beach vibe about it.

Buy an Imperial board and look as cool as Stu Titmus!